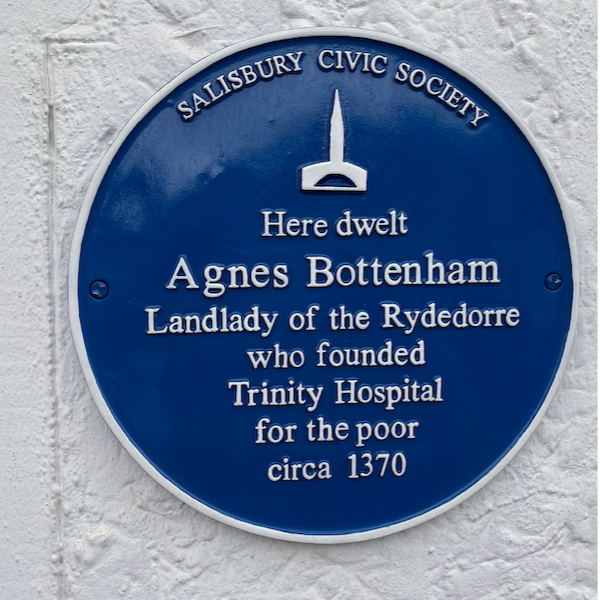 Agnes Bottenham founded Trinity Hospital, Salisbury in Trinity Street, in the 1370s, to house twelve poor residents and to offer three nights’ hospitality to eighteen poor strangers. Travellers who fell ill could stay until restored to health. As well as being a successful businesswoman, Agnes was clearly an expert fundraiser since by 1379 ten bishops across England and Wales including the Archbishop of Canterbury himself, were offering indulgences to those who would contribute to Agnes’ foundation.

Little is known of Agnes from the historic record. She was the widow of John Bottenham and she owned the land on which the Rydedore Inn (later the Star and now the Rai d’Or) and a nearby brothel sat, and she ran both businesses. It is believed that the hospital was built on the site of the brothel. Certainly she gave the land to build Trinity Hospital and the Rydedore Inn was given to the hospital after her death1.

Local legend is that Agnes founded the hospital to atone for her sins as a brothel-keeper2. What is known is that she applied her business skills to the foundation and there is evidence of sound administration in the early years. A Subwarden and a Chaplain were appointed, responsible for the physical and spiritual welfare of the residents and guests under the guidance of the mayor of Salisbury as Master. The hospital clearly achieved its aims, so much so that the city authorities, feared that it was attracting vagrants into the city. In 1438 the City banned the hospital from offering hospitality to strangers on the grounds that ‘all the needy staying in the city were received there’. In Salisbury local legend has it that Agnes is featured in the ‘Doom’ painting at St Thomas’s Church3.

There is some evidence that the hospital was re-founded after Agnes’ death and the foundation has continued and adapted over the years. The hospital was rebuilt in 1702 and in more recent times it has expanded its scope to meet current needs. It is now the headquarters of the combined Salisbury City Almshouse and Welfare Charities.

1John Chandler was Master of the hospital in 1383. The documentary record has him founding the hospital in 1394, so possibly after Agnes’s death. As her executor he gifted the Rydedore Inn to the foundation in 1399 in accordance with her will. He remained Master until his death when the role passed to the Mayor ex officio. There are internal hospital records cited which named Agnes as the original founder, but by 1470, John Chandler may have been considered the founder and Agnes almost forgotten. Haskins 1912 doesn’t even mention her. The situation is now reversed and it’s Agnes not John Chandler who has captured the modern imagination.

2The legend that Agnes founded the hospital as a penance is consistent with the contemporary attitudes of church and society. It is supported by a quote in the WAM Vol 36 article: “A document which may be assigned to the fourteenth century, after an allusion to the iniquities which had been perpetrated on the spot, while occupied as a brothel, where adulteries, theft and murder, and all other mortal sins, had been committed, and to the destruction of many, and the great peril of souls, says that the founders, by the inspiration of the Holy Spirit, had set up thirty beds…”

3  This is hard to substantiate due to the lack of historical record about Agnes but also about the Doom painting and the Master who painted it. The hospital was founded c.1370 and the Doom was painted c.1470. There would be no likeness of Agnes to use, so long after her death. The link between Agnes and the Doom painting may therefore be of recent origin. The St Thomas website refers to an Alewife being sent to Hell in the painting, but the church, keen to maximise its income, would not have advertised that benefactions didn’t work. It is therefore difficult to reconcile the extremely negative portrayal of Agnes in the Doom painting with the image of her as a philanthropist and expert fundraiser.

Royal Commission on Historic Monuments, Ancient and Historical Monuments in the city of Salisbury, 1980

The Ancient Trade Guilds and Companies of Salisbury, Charles Haskins 1912