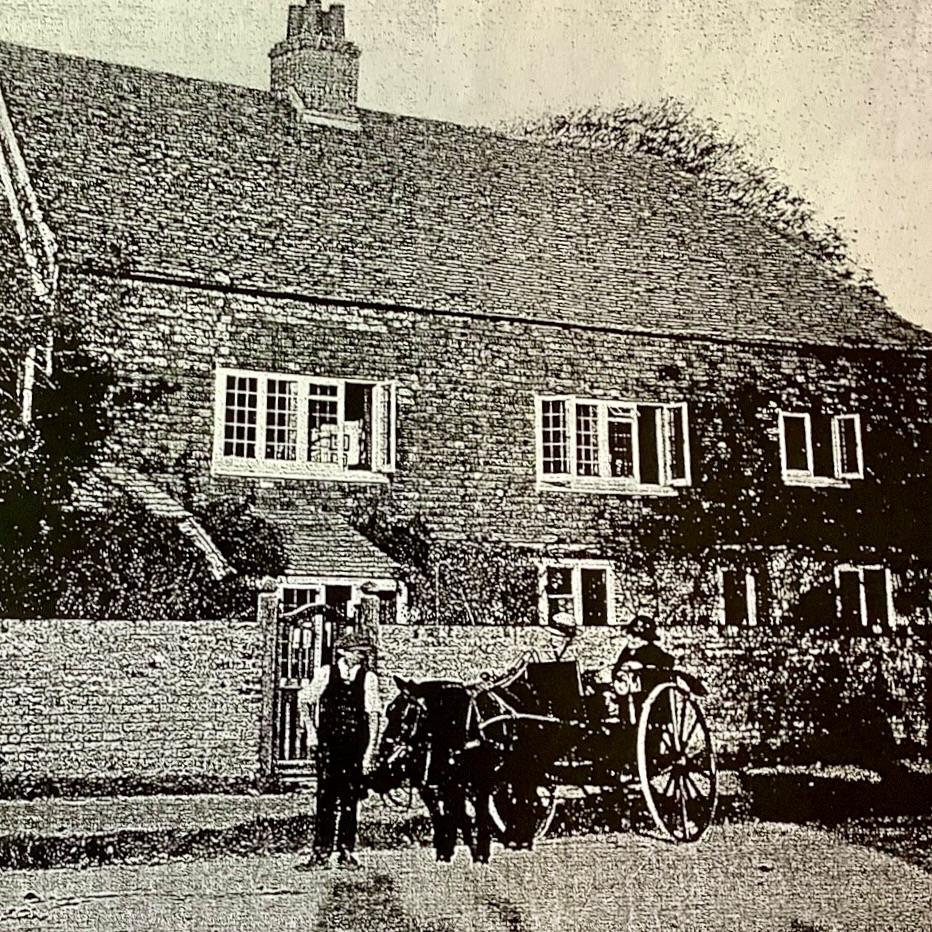 No Comments on Eleanor WarrePosted in Her Stories, Historic Women By Barbara EvansPosted on 27 March 202212 April 2022Tagged Artist, designer

Eleanor Warre was a talented designer and painter of Church Art, including stained glass windows, whose designs are still found in Churches in Salisbury today. The family were part of the Salisbury community for nearly 40 years, and they left a significant legacy of land and assets to the community of Harnham.

Eleanor, known as Nellie, was born in Olveston, Gloucestershire where her father Francis was vicar. She was the second of 4 girls, and her grandfather was a highly successful businessman. The family then moved to St Michael’s Church in Melksham, and it was here in 1880 that Eleanor and Agnes attended the Melksham School of Art. In 1883, Eleanor was the only student to be awarded top marks in her external exams.  At the age of 25 she produced a series of pencil drawings of the restorations of the local Edington Priory Church. These are now in the Wiltshire Heritage Museum, Devizes.

It was only when her father became Rector of both St John’s Church and St Andrew’s Church in Bemerton, Salisbury in 1890 that we have the most remarkable evidence of Eleanor’s talents. The family moved into the Rectory which was once inhabited by religious poet George Herbert. Within a few years St Andrew’s Church was undergoing extensive restoration work and Eleanor designed a carpet for the sanctuary which was made by Wilton Carpet Factory. There is a tale that Eleanor, acting on a dream, dug a hole in the floor of the church and discovered some bones. She declared them to be those of George Herbert whose burial place was unknown. Bones were indeed found during the restoration work and there is now a small plaque to George Herbert on the wall near the spot.

Eleanor then redirected her talents to St John’s Church where she started designing and making an oak reredos with gesso and gilded panels.  She also designed the striking mural of glass mosaic and gesso on the wall behind the altar, depicting a landscape with Medlar trees. The reredos was erected in 1905 and the mosaic was installed by Powell and Sons a few weeks later. Two altar frontals were also designed for both Churches.

Eleanor was a member of the Arts and crafts exhibition society and a glass bowl designed by her and made by James Powell and Sons was shown in the exhibition in London in 1893.  She also participated in the annual exhibition of the Society of Women Artist’s in 1901, 1904 and 1913.

Eleanor, her sisters and some of the villagers started a Mat Industry at the Church in 1903.  Within a few years they had won awards at the Wiltshire art and Craft exhibition and received orders from Churches as far away as South Africa.

Eleanor’s reputation extended to Westminster Abbey where she designed the carpet laid for the King’s Coronation in 1911. HM Queen Mary gave permission for the design showing Roses for England, Lilies for the blessed virgin Mary, Choughs, and other symbols to be copied by Wilton carpet factory for St Thomas Church in 1918.

After her father died in 1917, three of the sisters bought Old Parsonage Farm in Harnham where Eleanor set up a studio.  It was a working farm and all the houses in Lower Street were occupied by their farm and household employees. The Parsonage was close to St George’s Church and the sisters immersed themselves in the life and work of the church. Eleanor designed several stained-glass windows for this very plain church. The first was the East window in memory of Sybil, her eldest sister, who died in 1919. Two more were created for the south windows of the chancel. She designed the east window of the Trinity chapel as a memorial to the parish vicar of 34 years.  This cost £88 and was dedicated in 1930.  She gained inspiration for some of her designs from Salisbury Cathedral in particular the carved angels on the choir stalls. Two of the windows were installed by the London firm of Powell, which was also responsible for much of the stained glass in Salisbury Cathedral.

Eleanor designed and produced three seasonal free-standing triptychs modelled in gesso which were then painted.  Eleanor also had skills in embroidery, and she designed two fine altar frontals using textiles. The sisters trained some of the local women to complete the embroidery.

In 2013 another of Eleanor’s art works was rediscovered in St Andrew’s Church, Bemerton.   A black and white mosaic in Italian marble was found on the floor after lifting the heavy oak altar table.

Eleanor died in 1936 and an omnibus shelter she had erected beside the Old Parsonage was given to the Parish. Three years later stained-glass panels were inserted in the two pairs of lancet windows in the south wall of the Trinity chapel. These are thought to be from drawings left by Eleanor.

Agnes was also a hardworking member of the Harnham community.  She ran the farm, trained the choir, and took an active role in Parish affairs. After the last sister, Pauline, died in 1948, a bequest of £40,000 was given to St George’s church in Trust.  The PCC were able to buy the land for the Church Hall and the Scout hut.  Much of the farmland was given to the parish and the city including the recreation ground beside the river Nadder and Parsonage green on the south side of Netherhampton road.  Their name is perpetuated in the Warre Acre Allotments below Harnham Hill.  Eleanor and two of the sisters are buried at St George’s Churchyard.

An authoritative assessment of Eleanor’s work in 2005 by the University of London institute of Historical Research stated that her work was influenced by the Arts and Craft movement of Morris and Ruskin. ‘Each individual piece should be treasured for its quality and beauty, but as a group they were especially important as representative of the best work produced by women amateur designers of Church art in Britain.’

Researched and written by Helen Marston.

With grateful thanks to:

William Alexander the Archivist at St George’s Church, Salisbury, and