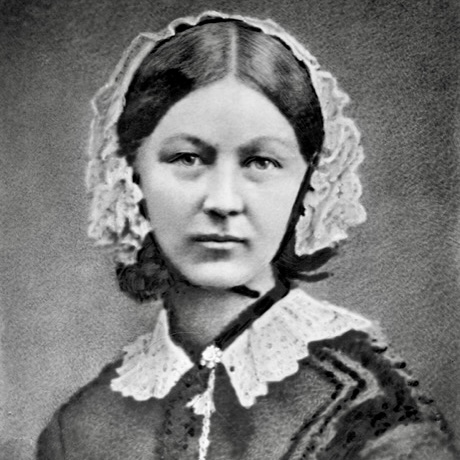 Florence Nightingale OM, RRC, DStJ (12 May 1820 – 13 August 1910) a woman of national and international reputation, has strong connections to Salisbury and with the Pembroke family of Wilton House. Having spent two years working as a nurse during the Crimean War, Florence was presented in the press as a national hero and became well-known as the iconic ‘Lady with The Lamp’. She is considered to be the founder of modern nursing and has had a tremendous influence on the field.

Florence was born in Italy, but the following year the Nightingale family moved back to England and lived between their two estates in Derbyshire and Embley Park, near Romsey in Hampshire. Florence’s interest in mathematics has been traced to her childhood when she persuaded her parents to allow her to study the subject. Florence was interested in hospitals and healthcare as well as in statistical analysis relating to populations and trends. She felt that nursing was a ‘God-given calling’. In her early 20s, she petitioned her family for the opportunity to train as a nurse at Salisbury Infirmary, not far from their home. However, her family were not keen for her to be involved in a profession that they did not deem appropriate for a woman of her social standing1. Also, at the time nursing was associated with immorality and had a negative reputation. Florence’s battles to overcome societal expectations are evident in her writing (for example ‘Cassandra’, originally written as a short story when she when 22 years old2).

Florence Nightingale had many achievements throughout her life and career, despite the many obstacles she faced. In 1850 her family allowed her to visit a training establishment for deaconesses in Kaiserswerth in Germany, where she gained an insight into medical and nursing care.

A few years later, in Europe, Florence met and became friends with Sidney Herbert3 and his wife Elizabeth. Sidney Herbert was also President of Salisbury Infirmary and son of the 11th Earl of Pembroke. In 1854 it was Sidney Herbert, in his role of Secretary at War, who asked Florence to take a team of nurses to support the British army in Scutari during the Crimean War. Florence would go on to stay in touch with Salisbury Infirmary throughout her career4.

Her work in Scutari led to many reforms including the improvement of sanitary conditions and infection control within the military hospitals, with the aim of reducing mortality rates. Reports of her care for British soldiers captured the imagination of the British public, and she became an icon of the Victorian era: the ‘Lady with the Lamp’ and a national heroine. In 1855 she was awarded a jewelled brooch by Queen Victoria for her efforts. In addition, donations of money were given by the public, originally intended for purchasing a gift of appreciation for Florence. However such a large amount of money was raised that this was used to set up a fund for nurse training. Using the Nightingale Fund, Florence set up the Nightingale Training School for nurses (early 1860s) at St Thomas’ hospital, which helped to better the reputation of nursing as a profession.

After the war: Campaigning for change

It is notable that after her return from the war she conducted most of her work from home. This is because during the Crimean War, she became ill with a bacterial infection which led to long-term illness. Over the years she made significant contributions to nursing, statistics and social reform, including writing books and reports, conducting statistical analyses, giving consultations and lobbying politicians.

Her bestselling book Notes on Nursing (1859)5 included information about practices which we take for granted today, such as the role of ventilation and cleanliness in infection control.

Florence’s passion for statistics continued and she developed new techniques for data visualisation and applied statistics6. In the late 1850s she carried out statistical analyses relating to the British Army in India and campaigned for improved sanitation and medical care. In 1858 she became the first woman Fellow of the Royal Statistical Society, and in 1874 she became an honorary member of the American Statistical Association.

Florence believed in the availability of healthcare for all. She helped with campaigning for social reforms such as the introduction trained nurses into workhouses in Britain. Her efforts in the war and in healthcare were recognised formally in 1907 when she was awarded the Order of Merit by King Edward.

Florence died in August 1910 at her home in London7. She had requested burial at St Margaret’s Church in Wellow, Hampshire. The family memorial is engraved with the initials F.N., disappointing those who would have preferred to see a funeral at Westminster Abbey, as this would have been considered to be a more fitting commemoration for such a significant statesperson.

Florence’s desire to be buried at St Margaret’s speaks volumes about her wish that her work be the focus of her legacy. Also, her connections to Wilton House are indicative of her ability to mobilise the resources available to her, as a woman of wealth, in order to achieve her ambitious goal of equal access to healthcare for all.

Florence’s wishes for her work to be the focus of her legacy have indeed been realised, as her work has made an impact in many diverse ways. We encourage readers of this piece to do further research to learn more about Florence’s life, work and legacy.

Florence Nightingale is a key role model in the field of nursing, and International Nurses Day is celebrated every year on her birthday, the 12th of May, to recognise the contribution of nurses. The Nightingale Training School is now the Florence Nightingale Faculty of Nursing, Midwifery and Palliative Care, at King’s College London. In 2020, the World Health Organisation designated 2020 as the ‘Year of the Nurse and Midwife’ in honour of the 200th birthday of Florence Nightingale.

Correspondence and archival materials relating to Florence and her work are held in several archives, including the Wiltshire and Swindon History Centre8. Other materials have also been archived, such as Florence’s very detailed papers on a variety of subjects including efficiency and hospital administration, hospital construction, the army medical school at Chatham, reading rooms and libraries for soldiers in army barracks, and sanitary improvements in India. The charity ArtCare, based at Salisbury District Hospital, manages the hospital’s archives which contain copies of the letters that Florence Nightingale wrote to a number of members of staff as well as a letter to her cousin Edith Joanna Bonham Carter9.

Salisbury is a city with a hospital renowned for nursing excellence, and it both influenced and was influenced by a woman of great reputation: Florence Nightingale

1 More about this can be found at the following link: https://www.history.com/topics/womens-history/florence-nightingale-1

3 Sidney Herbert was the son of the 11th Earl of Pembroke and ran the Pembroke family estates at Wilton House as well as serving in the Government, as the Secretary at War. Wiltshire and Swindon History Centre holds an extensive collection of documents relating to Florence Nightingale due to her connections to the Pembroke family of Wilton House.

4 More about Florence Nightingale’s close links to Salisbury can be found on the ArtCare website: https://salisburyhealthcarehistory.uk/florence-nightingale/

5 A digital version of the book is available here:  https://digital.library.upenn.edu/women/nightingale/nursing/nursing.html

6 While analysing some of the data from the Crimean War, she developed a graphical technique called the polar area graph, also known as the Rose diagram or the Coxcomb, which helped to visualise mortality rates and links to sanitation. The information was presented in a way that was understandable by those without a statistical background. This type of data visualisation is still used today. More on this can be found in the following article: https://www.theguardian.com/news/datablog/2010/aug/13/florence-nightingale-graphics

Letters from Florence’s time in the Crimean War can also be found at the British Library website: https://www.bl.uk/collection-items?creator_sorted=Florence*Nightingale

9 More about the letter can be seen on the ArtCare website: https://salisburyhealthcarehistory.uk/florence-nightingale-letters/

History Extra Podcast, 11th May 2020, The life and legend of Florence Nightingale.  https://www.historyextra.com/period/victorian/life-legend-florence-nightingale-mark-bostridge-podcast/

Wiltshire and Swindon History Centre (various records – see below). These reference numbers can be entered into the archive database at the following link, by going to the Advanced Search tab, and using the ‘Reference no’ box: http://calmview.wiltshire.gov.uk/CalmView/