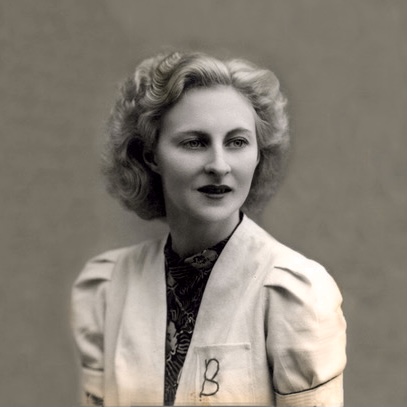 No Comments on Bette BlackwellPosted in Her Stories, Historic Women By Barbara EvansPosted on 9 July 20219 July 2021Tagged mechanic, WW2

Bette Blackwell was one of thousands of civilian women recruited during World War Two into a secret workforce producing Spitfires1 in factories hidden in Salisbury and the surrounding areas.

Salisbury was the first city to produce Spitfires after the Spitfire factories in Southampton were bombed. The manufacture of Spitfires was dispersed into workshops, garages, and bus depots. The country had to turn to unqualified young women to fill most of the skilled roles.

Bette was born and raised in Downton where her father was a barber. She was working as a hairdresser in Salisbury when, aged 20, she was called up to help with the war effort. After an interview and a medical she was told to report to Wessex Motor Garage, in New Street. Like most of the local population Bette had no idea that the factory now built Spitfires.

Bette was overwhelmed by the noise and fumes of the machines on her first day, and the workers had to shout to be heard.  She was not impressed when issued with men’s dungarees which swamped her, so she took them home to cut them down. On the production lines, Bette was expected to master the tools and techniques of riveting2 quickly. Wessex Motors produced fuselages and tail unit3 leading edges and riveters worked in pairs to hold the rivet up to protect the thin aluminium sheets.  The equipment was heavy, and she often did the job of ‘holding up’ because she was small and could fit inside the body of the aircraft.

She worked gruelling twelve-hour shifts for six days a week, and rotations of one month on day shifts and one month on night shifts. Supermarine4 had to hit delivery targets and the women were timed in everything that they did. It was made clear that they were there to work, not talk, as any slip-ups or mistakes would delay the whole factory process. Tea and lunch breaks were taken on the premises. The work was physically hard and repetitive, but Bette and the women adapted and thrived. They were well-paid, with the added incentive of bonuses if they increased their output.

The women never saw the fruits of their labour because secrecy was paramount. No one wanted Salisbury to be bombed like Southampton5. In the 2- 3 years that she worked there, Bette never saw the aircraft move out of the factory.

Bette cycled 7 miles from Downton to work daily and the blackout restrictions6 made this particularly dangerous in the winter months.  Food Rationing7 had been introduced so meals were not satisfying and in 1942 even soap was rationed, so it was difficult to clean up after a shift.

However, there was life outside work and Salisbury was rarely targeted by bombers. Bette played in a women’s football team and she loved to dance. Life improved for all when thousands of American G.I.s8 were stationed outside Salisbury prior to the D-Day landings9. Bette used to visit the doughnut stand outside the new hospital and attended lots of dances.  She was a fan of the swing musician Glenn Miller and saw him in concert at Victoria Gardens in Salisbury with thousands of G.I.s.

The factories remained a well-guarded secret throughout and the women never spoke of their role to family or friends. Over 2000 Spitfires were built in Salisbury- this made up 10% of all Spitfires produced during World War Two. When production ceased, the women returned to their ordinary lives. Bette married Albert Blackwell in 1947 and they brought up two children in Downton.  She continued to work as a hairdresser from her home until later in life and she was a pillar of the Downton community.  Bette’s story was only bought to life 70 years later when she talked about her experiences for the Secret Spitfires film and book (The Secret Spitfires (2020), further details in sources section below).

Researched and written by Helen Marston, edits and notes by S. Ali.

1Spitfires are a type of British fighter plane that were used by the Royal Air Force during World War Two.

2Riveting is a technique which is used to fasten pieces of material (for example sheets of metal) together when building an aircraft.

3These are names for parts of an aeroplane. The fuselage is the main body of the aircraft. The tail unit is the back section of the aeroplane.

4 Supermarine was the name of a company which produced Spitfires and chose Salisbury as one of its locations for production.

5One of the Supermarine factories making Spitfires, based in Woolston, Southampton, was specifically targeted and bombed in September 1940 by the Nazi German Luftwaffe (air force). 110 people were killed, and the majority of the factory was destroyed.

6Blackout restrictions– during the World War Two, blackout was the practice of minimising outdoor light at night-time as a precaution to prevent enemy aircraft from being able to identify targets for bombing. This imposed darkness made it more difficult for citizens to navigate around their area at night, for example because of streetlights being dimmed or switched off and dimmed traffic lights, as well as buildings and houses having to block any light from inside. As a result, many people were injured in road traffic accidents and injuries from falling or tripping. Many were also victims of crimes. Therefore Bette’s journeys to and from work must have been difficult.

7Food rationing was introduced by the government during the second world war to make sure that food was distributed equally when it was scarce and to make sure there was enough food for everyone. Soap was also rationed to save on the use of oils and fats. Each person was entitled to a specific amount of food each week, and this was monitored using a ration book, issued by the government. Rationing continued for several years while supplies were scarce, and gradually, specific items were removed from rationing restrictions. It ended in 1954, when the sale of meat and bacon was no longer restricted.

9 The D-Day landings were part of a military operation code-named Operation Overlord. These landings were the start of the months-long Battle of Normandy and started off the process of liberating western Europe from Nazi occupation: a key moment in the history of World War Two.

Preparations started in 1943, and it is estimated that 1.4 million American servicemen came to Britain to take part in the landings. On the 6 June 1944 around 156000 allied troops from 13 countries landed at the coastline of Normandy, arriving by warships, landing crafts, vessels, tanks, parachutes and gliders. There were casualties on the journey and on D-day itself: many thousands of soldiers and civilians died. On 6th of June every year, the anniversary of this historic occasion is marked and those who died are commemorated.

Resources and information about World War Two and war memorials