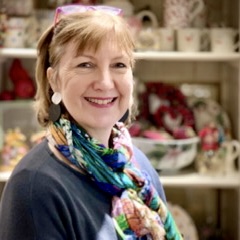 No Comments on Susi MasonPosted in Contemporary Women, Her Stories By Barbara EvansPosted on 16 July 202117 July 2021Tagged business, commerce

Susi loves living in Salisbury and is the owner of an independent shop called ‘Casa Fina’, located near to the entrance to the Cathedral Close. Susi has been running the shop for 40 years, initially with her mother but for the last 20 years on her own. Casa Fina is well known in the city for its stunning window displays that catch the eye of visiting tourists and locals alike.

Do listen to Susi’s story of an idyllic childhood in Essex with her parents and 2 brothers. The family unit was fragmented when Susi’s father was killed in a car crash when she was 12. Susi marvels at the way her mother coped after that and is grateful that her mother chose to move to Salisbury to open the shop ‘Casa Fina’. Susi’s mother was an amazing influence and support in her life when she too found herself with 2 children, on her own, needing to bring them up single-handedly just as her mother had done

Susi has always been an advocate for independent shops in Salisbury of which there are many, and she believes that the diversity of independent businesses is one of the key reasons that people visit Salisbury.  She feels that they should be encouraged and cherished. She founded and chaired their ‘Indies’ group and is also involved in the Salisbury BID (Business Improvement District) which invests in the city, works closely with city partners to raise the profile of Salisbury and acts as a voice for the city’s businesses. She has been interviewed nationally on radio and TV about these issues and was awarded a Lifetime Achievement award at the South Wilts Business of the Year Awards in 2019.

Susi loves the cathedral and its Close and has stories to tell about the opportunities that she has had to be involved in its life whether as a marshal during Antiques Road Show, enjoying open air events or marshalling when the cathedral became a temporary Covid centre. She also enjoys just sitting in the Close and ‘being’!

A mother with 2 grown up children, her life, like her mother’s was not always easy. Hear the advice that she would give to girls and young women about seeking the positive in all situations, and to keep focussed and determined in life.  She also has much to share about coping in the business world!