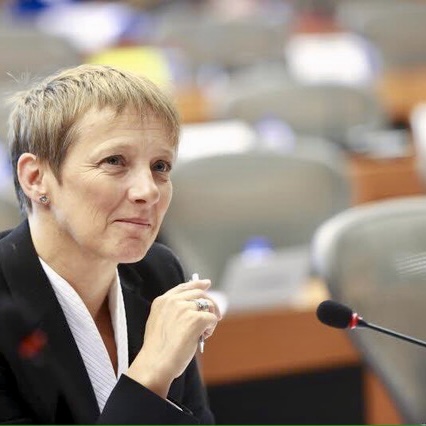 No Comments on Clare MoodyPosted in Contemporary Women, Her Stories By Barbara EvansPosted on 28 December 202129 December 2021Tagged Politician

Clare was an MEP (Member of the European Parliament ) for the South West constituency, which includes Salisbury, from 2014 – 2019. In this podcast you can hear how she overcame various challenges to become a trade unionist and politician.

Brought up in Burford, a small market town in Oxfordshire, Clare attended the local comprehensive where her parents taught. She didn’t enjoy school and struggled academically, leaving just before she was due to resit her ‘A levels’, to take a job in a restaurant in Portugal which served as her introduction to the concept of the European Union.

On returning from Portugal Clare trained as a secretary and at 20 gave birth to her son, taking on the challenge of single parenthood. She set about training as a hypnotherapist to enable her to care for her son. She later enrolled in the University of Kent to study social psychology but switched to industrial relations.

Her first job working with a trade union was with Barclays staff union.  Changes and mergers over the years meant the she ended up working for a union affiliated to the  Labour party – Unite. Whilst at Unite she had the opportunity for a secondment to Gordon Browns’s political office for two years from 2008-2010. Listen to the podcast to find out more about life in Number 10 and beyond.

In the podcast Clare shares her experience of being an MEP and a woman in politics. During her time in Brussels she worked on a number of issues that related to women specifically, such as mainstreaming gender budgeting. She also shares her views on the abuse and threats women in public life are subjected to.

Since losing her MEP role Clare has become joint chief exec of a charity but doesn’t completely rule out running for public office again sometime in the future.