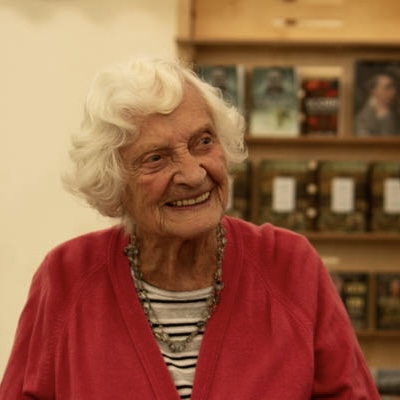 No Comments on Evelyn WartonPosted in Contemporary Women, Her Stories By Barbara EvansPosted on 4 July 20214 July 2021Tagged Author, WW2

Hear Eve talk about her amazing life, full of unusual twists and turns. From a cocooned life of privilege in-between the wars, to joining the WRNS to becoming part of a new elite category known as Night Vison Testers, to a happy family life after the war despite being impacted by sorrow and loss.

Eve describes her secure, privileged upbringing including finishing school and being a debutant at the beginning of the war. But she chooses a much more adventurous and independent life for herself, showing remarkable resilience as she deals with whatever life throws at her. Eve shows her determination and a strength of character that has driven her throughout her long life.

At 17 Eve is determined to do her bit for the war effort, and volunteers to serve as a red cross nurse, before joining the WRNS. Accepted in the WRNS, not as an officer, but as ‘other rank’, Eve has to learn to live a very different kind of life to the one she was brought up to expect. She is used to being chaperoned, only talking to men she has been ‘introduced’ to, so it’s an almost impossible task for her Senior Wren Officer to find a suitable category for this naïve girl. Eve finally finds a role that suits her as a Night Vision Tester, training young pilots to see in the dark so they can land their planes on the deck of their aircraft carrier and not in the sea. This requires her to travel to all the Naval Air Stations in the UK during the war and also get involved in other scientific tests designed to prevent accidents and keep the airmen safer.

Impacted by loss during the war, Eve eventually finds love, and settles down with her new growing family, but even then the impact of the war requires her to be particularly resilient and continue with her ‘just get on with it’ attitude, which survives to this day. 10 years after her first husband had passed away from his war injuries she found love again….

Eve’s inspirational determination and grit is a lesson to us all!

Eve’s book of her war stories is called ‘Brave Faces ‘ using the name Mary Arden and you can often find Eve signing her book at local history festivals.

Interview and article by Jenny Hair