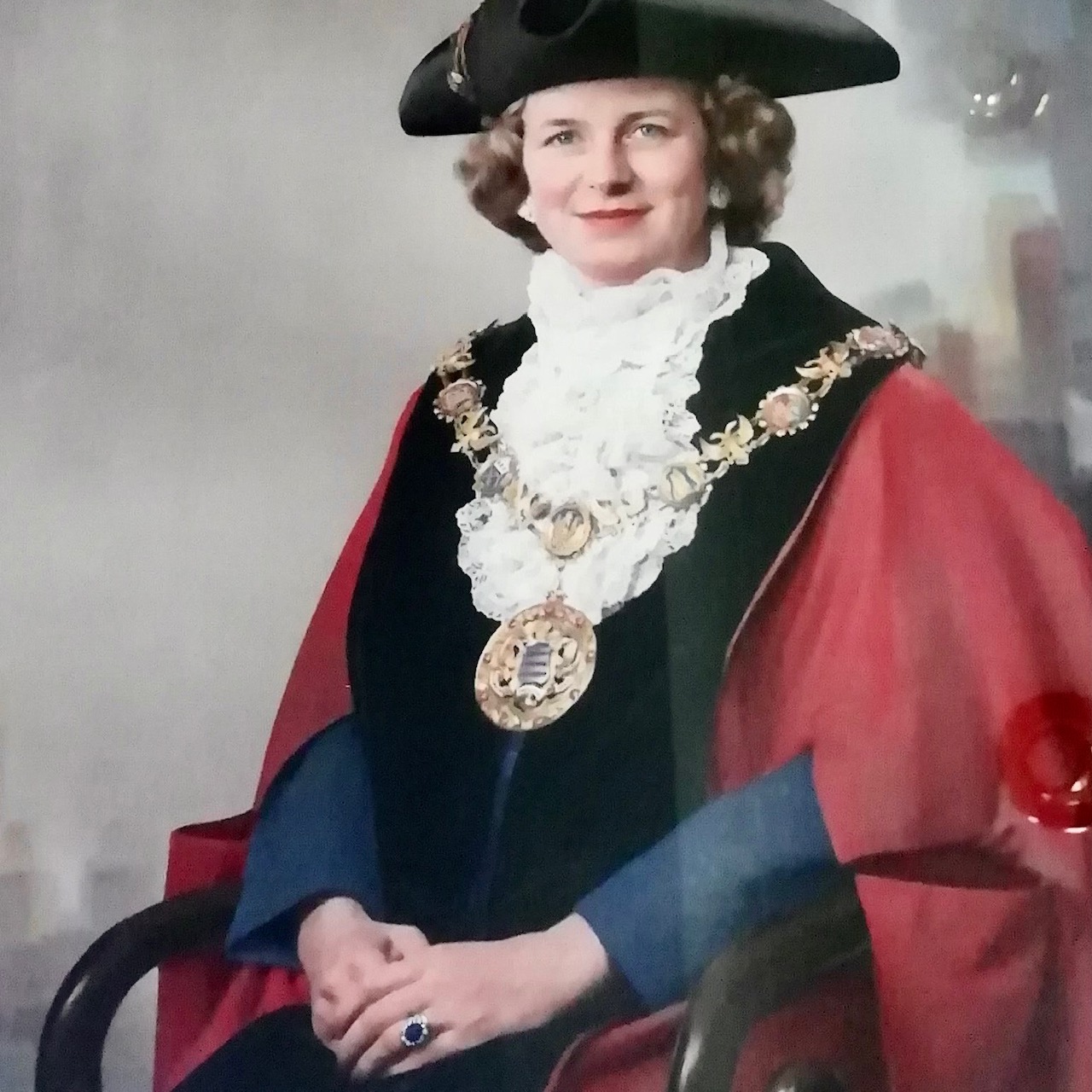 No Comments on Jo BensonPosted in Contemporary Women, Her Stories By Barbara EvansPosted on 3 July 202125 July 2021Tagged mayor, Philanthropist

The podcast that accompanies this article is an interview with Jo’s husband Sir Christoper Benson as due to ill health we were unable to interview Jo herself.

Lady Jo Benson…… passionate about Salisbury and its people!

When the Salisbury Journal ran a competition asking for nominations for the woman who had contributed most to the life of Salisbury, it was Lady Jo Benson who was chosen by the readers for this honour. Born in Salisbury, Jo was the daughter of a local business man, a Mr Bundy.  Jo attended the Godolphin school for her secondary education. She then progressed to teaching at Leaden Hall and was liked and respected by the children there.  However it was a visit with an official from the NSPCC to the Churchfields site in Salisbury, that was pivotal in her life journey. The Churchfields area was at that time a very rundown part of the city, and she was shocked by the appalling housing, poverty and poor quality of life that she witnessed there. She resolved to make changes in whatever way she could from that day onwards, and that she did!  Her life of service to and for others is reflected in all that she undertook. She became a Salisbury Councillor specifically to implement change, and later she became a member of Wiltshire Council determined to work for good from within the system.

She supported many groups and charities such as Cancer Research Campaign,  and was President of the Salisbury City Almshouses charity. She supported the Girl Guide Association and became President  of the Wiltshire Girl Guides.

Jo was elected mayor of Salisbury from 1969-70 and her husband Sir Christopher Benson remembers her driving a double decker bus around the city during that period. Luckily, she was a very good driver, indeed becoming the first female chair of the Royal Automobile Club!  Sir Christopher tells a charming story about her first visit to the London RAC centre, which can be heard on the interview below.

She was remembered in name that year, for setting up the Jo Benson Day Centre for those adults with physical and emotional need. The centre was awarded  The Queens Award for Voluntary service. This is again a reflection of her commitment to the city she loved and her mantra of service and care.

She was awarded an OBE in 1973 and enjoyed we are told, an intimate dinner with the Queen and Prince Phillip at Windsor castle.  She would never talk about herself but happily tell stories of others. She had it seems a huge number of hats and used to visit groups and organisations, using the hats as the focus of her story telling!

As the mother of  two boys Jo was passionate about children and supported many local schools as an active governor. These were Bishop Wordsworth school, Chafyn Grove, St Marks Junior school and in 1974 onwards Exeter House Special school.

Lady Jo’s husband has committed his family to writing her life story as she currently suffers from Alzheimer’s and cannot do so herself. I am sure that such a book would be received with enthusiasm and interest and  have much to teach us all.

Her Salisbury Story would like to thank Frogg Moody for his help in compiling this article.