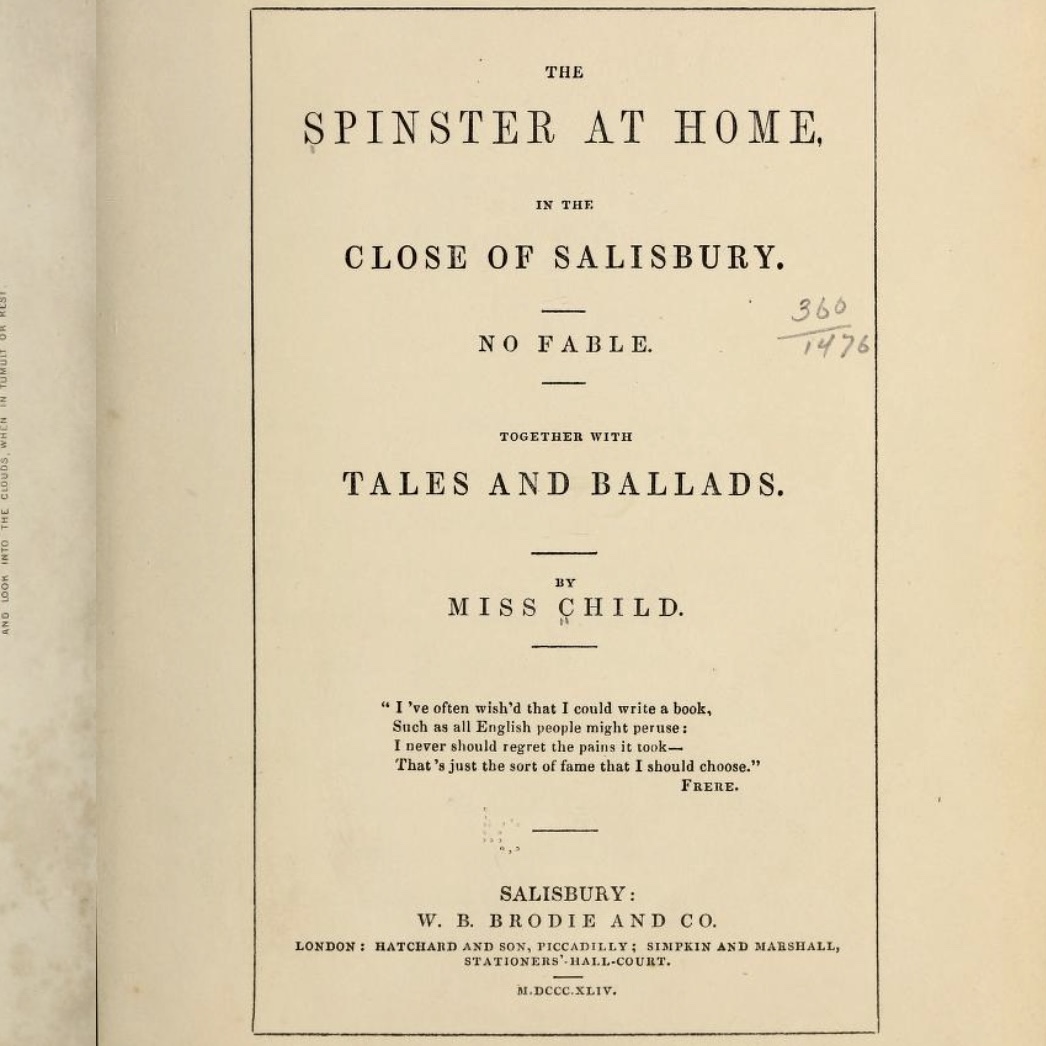 No Comments on Frances ChildPosted in Her Stories, Historic Women By Barbara EvansPosted on 21 March 202225 March 2022Tagged Author

A spinster gentlewoman of modest means had few opportunities in the Victorian era to supplement her income. Miss Frances Child  (1787 – 1869) put what talents she had to enterprising use by publishing her book, The Spinster at Home in the Close of Salisbury, 1844, amusing herself and others and making some welcome income besides. The publication of her first edition follows close on Dickens’ Martin Chuzzlewit, which is also set partly in Salisbury and its surrounds, and may have generated interest in the area to Frances’ advantage.

Though Frances occupied an address in the prestigious Cathedral Close1 it is clear she lived frugally, entertaining friends with ‘A tiny decanter, a wee cake on a tray’.2 More telling is her comment that in twenty-two years in her home she was ‘oblivious never to the strict day of rent’.3 She kept one maid, a source of frustration, who Frances wishes could be replaced by a ‘tidy automaton working by steam’.4 She complains that engineers are too taken up with ‘rail-roads and air-roads’ to address domestic improvements.5 These small insights into her imagination help endear Frances and her rambling work of poetry to the reader, as much as the sheer volume of local incidents she recounts.

The Spinster is an amusing miscellany of all things Salisbury and beyond, a jumbled parade in over 300 pages of verse from the founding of the Cathedral and civil war skirmishes to floods and royal visits, grisly murders, escaped lions6 and Victorian urban myths; ‘What every one says there’s no doubt must be true’, Frances says of one horror story, winking at her local audience with the claim that Salisbury natives know the exact circumstances and ‘the rest of the world I’m resolved not to tell’.7 Her book was sufficiently popular8 to run to six editions as well as a later Historical Annex.9 Frances published a new edition of The Spinster roughly once a year between 1844 and 1859. She records with satisfaction that her fourth edition is on sale at Waterloo Station10 and has been sent as far as New Zealand.11 With a commercial eye, each edition ends with the same exhortation to her reader ‘Buy a book, buy a book’.12 Her greatly enlarged sixth edition adds contemporary accounts of new building projects: Sidney Herbert’s Italianate Church at Wilton and Pugin’s St Osmund’s Church.13 She also includes ‘The Salisbury Dirge for Friday, October 29th, 1847’ on the subject of the collapse of ‘B___’s Bank’, following government regulatory changes that precipitated a brief financial crisis that year.14

Some critics have questioned Frances’ supposed authenticity, quoting unverifiable footnotes, while admitting that many possible sources have since been lost or destroyed.15 There is certainly evidence to support some of even her wilder tales, though her habit of interspersing history with myth and rumour means the reader must proceed with caution.

Frances continued to regularly publish poems to commemorate events in the city. When, in 1852, the Salisbury Exhibition was the first of its kind held outside London, following the Great Exhibition of 1851, Frances published a sixty-nine-verse poem to commemorate the event.16 Later printings of the sixth edition contain additional poems about Queen Victoria’s visit in 1856 and the wedding of the Prince of Wales in 1863.17 Frances’ impressive list of publications shows she was very successful in her day.18

Almost nothing is known about Frances prior to her time in the Close. Born in Romsey in 1787, she came to the Close some time before 1841, when she is first recorded in the census records, claiming an optimistic 40 years of age (but actually 54). In the 1861 census this rose to a hopeful 67. When she died in 1869 it was claimed that at 83 she was the oldest resident of the Close. She was buried on 2 Dec 1869 in the cloister garth at the cathedral.19

Written and Researched by Janet Thirkell. Edits by S.Ali.

1 52 The Close, on the outer right-hand corner just inside the High Street Gate, from which she was ideally placed to observe all of the comings and goings between the Close and the city

2 Child, Frances, 1849, The Spinster at Home in the Close of Salisbury, sixth edition, 1849, Frederick A Blake, Salisbury, Hatchard and Son, London, 96

4 Frances writes: “One small maiden I cherish, just turned of sixteen,/Who cracks pitchers and platters while scrubbing them clean, /And hardly may ‘scape China’s rich porcelain vase /The treasure of Spinsters by well-approved laws;…Eyes of maidens will roll, too, on well-favoured swains, /Who create sad confusion in hearts and in brains;/ So I wish I could put into substance my dream, /Of a tidy automaton working by steam, /Who would do what was needful without being bid,/ Wanting no watchful eye, nor for mischeifs be chid.’

6 The 1816 attack of the London to Exeter coach at Winterslow Hut by an escaped lioness is recounted by the Postal Museum, https://www.postalmuseum.org/collections/mail-coaches/ , (accessed 23 Nov 2021)

9 a ‘valuable work of references, containing copies of original letters and historical anecdotes not to be found in any other publication’, review by CE, found in the back of a later ‘sixth edition’.

14 Child, 1849, 364-372. Only one bank beginning with ‘B’, Brodie’s (William Bird and Charles George) is listed in the trade directories of the period. They are also registered as ‘Printers’, in fact they were Frances’ own local publishers of her earlier editions. Their collapse explains the change in publisher with the sixth edition from Brodie’s in New Canal to Blake’s in Blue Boar Row.

15 Hobbs, S and Johnson, S, tried in vain to find the source of one particularly lengthy, and suspect, footnote but also noted that various records have been lost or destroyed by fire etc in the intervening period. Hobbs, S, and Johnson, S, 2004, ‘The Spinster and the Plague’ 31-37 in Sarum Chronicles Issue 4, 2004, Hobnob Press.

16 Howell, J, 2007, Independent Women in Public Life in Salisbury in the Second Half of the Nineteenth Century, Department of History, Goldsmith’s College, University of London (unpublished doctoral thesis), 43 footnote 2

17 ‘The Royal Visit Salisbury August The 15th 1856’, on the occasion of Queen Victoria’s visit to Salisbury, and ‘The Royal Ovation, Salisbury March the Tenth, 1863’, describing local parades and festivities, complete with the Salisbury Giant and Hobby horse, to celebrate the wedding of the Prince of Wales, the future Edward VII.

18 Howells, J, 2007, Illustration 7, 269. The list shows: The Spinster At Home In The Close of Salisbury (and a Historical Appendix); Annette’s Birthday Banquet, Fancy Ball, & Amateur Concert; The Salisbury Exhibition, The Salisbury Jubilee of 1856, and Songs of War and Peace.

The spinster at home in the Close of Salisbury, no fable, together with tales and ballads.

An historical appendix to the Spinster at Home in the Close of Salisbury 1852, Salisbury: Frederick A Blake.  (available at WSHC)

“The Royal Visit Salisbury August The 15th 1856 on the occasion of Queen Victoria’s visit to Salisbury” (4 pages).