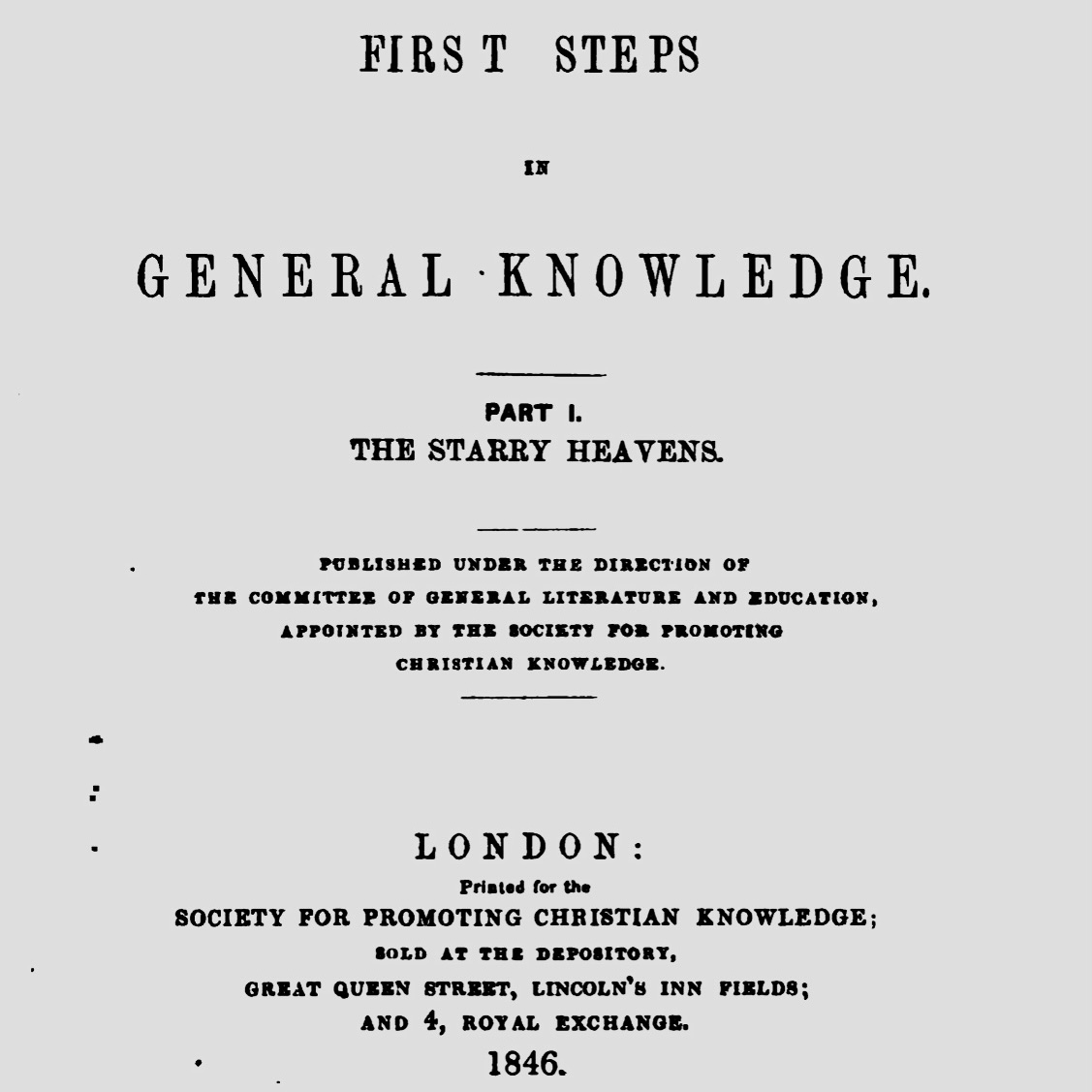 Sarah Windsor Tomlinson (1809-1872) was a British author of notable 19th Century books such as ‘First Steps in General Knowledge’.

Sarah Windsor was born in Salisbury into modest circumstances on 28 December 1809 to Mary (née Tubbs) and Daniel Thomas Windsor. She was baptised at St Clement’s Church, Fisherton Anger. The family lived and owned a house at St Ann’s Street and later in The Close. The meadowland around Windsor Street/Road, were owned by her maternal and paternal grandparents, and are named after her father or brother who were land proprietors (in 1840-78). There was no school for girls until 1833 in Fisherton Anger, so she was educated at home by her sister, Maria. She also trained in Sunday School teaching and parochial work at St. Thomas’s Church, Salisbury, under the guidance of Rev. Mr. Capel, then Rector of Wareham, and Mrs. Capel, the then officiating minister of St. Thomas’s, and in her early twenties, had a role teaching two daughters of a lady in North Wiltshire.

Charles regularly gave lectures at Salisbury Mechanics Institute and Salisbury’s Institute of Literacy and Science.2 After a few years, they moved to London, for Charles’s work as a scientist and scientific writer.

Sarah had been born into Georgian England where women had little personal freedom, and religion was central to life. She lived through an age of social change and intellectual questioning, where natural theology3 was mainstream. The Victorian era was a time of several scientific discoveries. There were challenges to faith from science, philosophy, and Biblical criticism.4 Sarah must have engaged in such debates, especially as Sarah and Charles worked together on articles for the Saturday Magazine5, covering diverse subjects such as nature, travel, science and history for the ordinary person.

She also wrote books on a number of topics throughout her life. Several of Sarah’s books were published by The Committee of General Literature and Education under the Society for Promoting Christian Knowledge,6 for example the book series “First Steps in General Knowledge (1846)”;7 “Lessons Derived from the Animal World (1847)” and “Sketches of Rural Affairs (1862). First Steps in General Knowledge” is a conversation between children and an adult which does not stint on objective science and attributes these to the Divine Creator. It has been selected by scholars as being culturally important, as part of the knowledge base of civilization, symbolic of the dichotomy, and was still in print with 13 editions by 2010.

In 1842, Charles was appointed as a lecturer of experimental science at King’s College. For 25 years Sarah managed the many duties associated with hosting boarding students from the college as well as managing the household. The couple hosted parties with eminent artists, scientists, and writers in attendance, and one can imagine that deep debates took place.

Education, particularly of the working class, was important to Sarah and was a main theme in Sarah and Charles’ lives. In 1866 Sarah became a lady superintendent8 to a parochial mission in London (possibly the Training College for Lay Workers in Stepney). In this role she promoted literacy among new mothers. She wrote “The Sisters”, which instructed young women of poor means to become trained as governesses or seamstresses.

Sarah and Charles would visit the local workhouse or poorhouse to attempt to better the lives of those living there. It was during this time, while ill, she wrote “Tales for Mission Rooms, by a Lady Superintendent” (1873), a collection of short stories supporting Christian morals and values.

Sarah died on 17 October 1872 and was buried in Highgate Cemetery in London.

Sarah clearly thought education was important in a time before state schooling and used her faith and passion to improve literacy and to guide young people. In terms of her legacy, her twelve books are available online, but are otherwise out of print in the UK

Researched and written by Heather Sheeley, edited by S. Ali.

1 He became a notable experimental scientist, author and member of the Royal Society, who regularly lectured at Salisbury Mechanics Institute and Salisbury Literary and Science Institute. He is credited with many significant discoveries.

4 At the beginning of the nineteenth century in Britain, religious faith and the sciences were generally seen to be in harmony. More on this can be found at the following link: https://victorianweb.org/victorian/science/science&religion.html

6 The SPCK was an Anglican mission society, which still operates today. It conducted a number of activities including helping local parish groups set up schools, providing teacher training. It has been argued that the modern concept of primary and secondary schools came from these schools.

Relevant information can be found at the following links:

7 This book is a conversation between children and an adult which does not stint on objective science and attributes these to the Divine Creator.

8 Parochial missions were a type of specialist mission aimed at preaching to Catholic followers. The role of lady superintendents within parochial women’s associations was to oversee the mission.

More about parochial women’s associations can be found here: https://slumexplorers.wordpress.com/faith-and-belief/the-parochial-womens-association/

Robson, John,1990, ‘The Fiat and Finger of God: The Bridgewater Treatises’, Lightman, Bernard, and Frank Turner ed., Victorian Faith in Crisis: Essays on Continuity and Change in Nineteenth-Century Religious Belief.

Royal Society, 2004, The life and work of Charles Tomlinson FRS: a career in Victorian science and Technology. https://royalsocietypublishing.org/doi/10.1098/rsnr.2004.0056