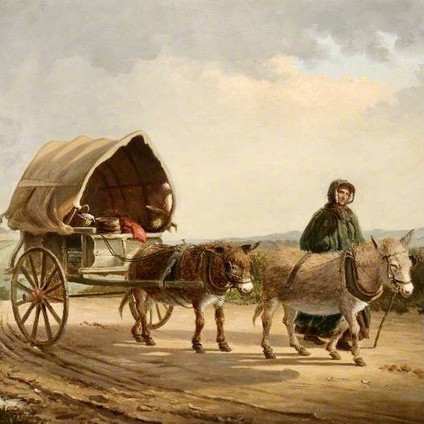 No Comments on Maria RidoutPosted in Her Stories, Historic Women By Liz BattenPosted on 8 May 20214 August 2021

Mrs Ridout is remarkable in that she was an ordinary woman travelling with her donkey cart in the fading rural life of the late 19th Century, captured in artwork by Salisbury artist Frank Brooks.

Maria Corp, born 1814 at Witham Friary, Somerset, married Robert Ridout (1789-1868) in 1853 at St Mary the Virgin, Redlynch, joining generations of common carriers1 at Coombe Bissett. The Ridouts occupied Long Cottage near the church in Coombe Bissett, with Mrs Ridout’s donkeys being kept on the green, still called the donkey meadow after them. According to the 1867 Wiltshire Directory she left from the Shoulder of Mutton pub (which was on Bridge Street), and in the 1880s from the Haunch of Venison pub, every Tuesday, Thursday and Saturday for the villages of Coombe. She is recorded in Coombe Street as a shopkeeper and in the 1871 census as a carrier. In 1881, she is recorded as a widow pauper living with her brother.

The route that she took with her cart is almost a direct line north, for about three miles, although there are significant hills on the route, which perhaps explains why there were two donkeys, Jack and Jane.

In the Ceramics Gallery of The Salisbury Museum, there is an oil painting (30x19in) dated 1878 entitled “Mrs Ridout and the Coombe Express” by a local artist Frank Brooks (1854-1937), an internationally renowned portrait painter. It depicts a woman in a cloak and bonnet with a covered cart with two donkeys, one in harness, in a rural setting. He wrote a letter about Mrs Ridout to the Salisbury Times in 1933, as follows:

“My attention has been called to several letters, both interesting and amusing, in your paper with regard to an old friend of mine of the 1870’s. I was then beginning my career as an artist and looking about for something to paint. The old lady and her donkeys struck me as an attractive and picturesque subject, so I thought I would try and paint a picture of her. I used to meet her at Harnham Bridge, when she was leaving the town, as she always made a stop at the old and picturesque inn called “The Swan,” for a last refresher for herself and the donkeys, generally, l think, from the same jug. Here I began my sketches. I often walked with her to Coombe, and the pace was such that at times, I was able to walk backwards and draw, hence the name she was so well known by. The background for the picture I sketched about half-way to Coombe, looking back along the old road, with Harnham Folly in the distance. The old lady, of course, went by what was then called the new road.”

Mrs Ridout died in 1886 and is buried in the churchyard of St Michael and All Angels, Coombe Bissett. There is no headstone.

Researched and written by Heather Sheeley, edits by Susan Brain and S. Ali.

1A common carrier was one who was not tied to a particular master or specific goods, so anything or anyone could be conveyed by them. Country or village carriers were commonplace in rural areas and market towns, particularly in Victorian times before the advent of the motorbus around the First World War. Carriers would have been the main transport from South Wiltshire villages to Salisbury market. They took heavy luggage, local produce, ran errands, acted as shopping agents, delivered messages and were the main mode of transportation for those old or too ill to walk. They served as feeders, taking parcels and goods, for the growing railway network. The railways were bad news for long distance carriers but good news for the country carriers. They often made a living from other activities such as farming, running pubs or being shopkeepers. The number of carriers began to dwindle around the time of the Great War.

Pearce, Michael, 2014.  The History of Harnham, compiled in 1952-54 by the Harnham Women’s Institute. Coombe Bisset and Homington Express.

Photographs of The Swan used with kind permission of Salisbury Museum.