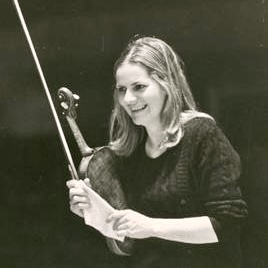 Iona Brown (1941 – 2004) was a world-renowned violinist, who played with grace and warmth, both as a soloist and with international orchestras. As ill health began to limit her ability to play to her own virtuoso standards, she increasingly conducted those orchestras, and was no less successful in that field.

Elizabeth Iona Brown was born in Salisbury in January 1941 to musical parents, all four of whose children became professional musicians1. She joined the National Youth Orchestra of Great Britain as a teenager, before studying her craft across Europe. In her early twenties she joined the London-based Philharmonia Orchestra, where she was heavily influenced by its principal conductor Otto Klemperer, in both her playing and eventually her conducting.

In 1964 she joined the Academy of St Martin in the Fields, where began her long association with chamber music, an art form which is performed by a small group of instrumentalists, often early Classical music, which demands exacting precision from its players. Her brilliant contributions to multiple Academy recordings display her rare talent for adding a warmth and elegance to the performances.

Iona rose through the ranks of the Academy to become its leader, solo violinist and director by 1974, and although she formally left in 1980, she continued to work with them throughout her life. Her career took her around the world, both as a performer and a conductor, and she worked in the Norwegian Chamber Orchestra, the Los Angeles Chamber Orchestra, the San Francisco Symphony, the City of Birmingham Symphony Orchestra and the Danish Philharmonic Orchestra, amongst others. Her success as artistic director of the Norwegian Chamber Orchestra inspired King Olav V of Norway to award her with the Knight of First Class Order of Merit. In 1986 she was awarded with an OBE.

Iona displayed not only elegance and passion in her playing, but also tremendous resilience. On one occasion, she was due to perform in the first half of a concert at the Albert Hall’s famous Proms season, and was feeling unwell. However, rather than cancel her performance and disappoint the audience, she persuaded the organisers to change the order of the musical programme. She performed in the second half of the concert and received huge applause.

Iona Brown retained a home base in Bowerchalke from the late 1960s until the end of her life. Walking in the Wiltshire countryside nearby she could not fail to notice the song and aerobatics of the skylarks, which inspired her close association with Vaughan Williams’ composition, The Lark Ascending. She often performed the piece, and her name is regularly associated with the best recordings of the work2. Her expertise and insight (into the birds and their landscape, and of course the music) meant that she made the technically difficult piece soar and flow, apparently easily. Perhaps fittingly, it was the last piece she performed as a solo violinist, with the Tokyo Philharmonic Orchestra.

Iona’s resilience also came to the fore as she battled the increasing effects of rheumatoid arthritis. Undeterred, she continued to work with the music she loved, inspiring and leading fellow musicians, as a conductor. Salisbury was the setting for her final concert where she conducted the London Philharmonic Orchestra in May 2002, on the same day she had a diagnosis of cancer. Iona Brown remained in Salisbury until her death in 2004.

Neville Marriner, her predecessor at the Academy, wrote of her, with wonderful warmth: “As a violinist she embraced the romantic movement with warmth and passion, and in the early classical repertoire she displayed a fastidious elegance that observed the performing conventions of the 18th century without letting the music dry out…”

Iona has left a tremendous legacy in music, and her discography includes her work as violinist and director. You can view a performance of L’inverno (Winter), movement 2: Largo from Vivaldi’s Four Seasons by Iona Brown and Patricia Mabee here

Researched and written by Rachel Cude. Notes by S.Ali

2 You can access a recording of The Lark Ascending, featuring Iona Brown on violin, here: https://youtu.be/Cyw6Ul2Rx3w