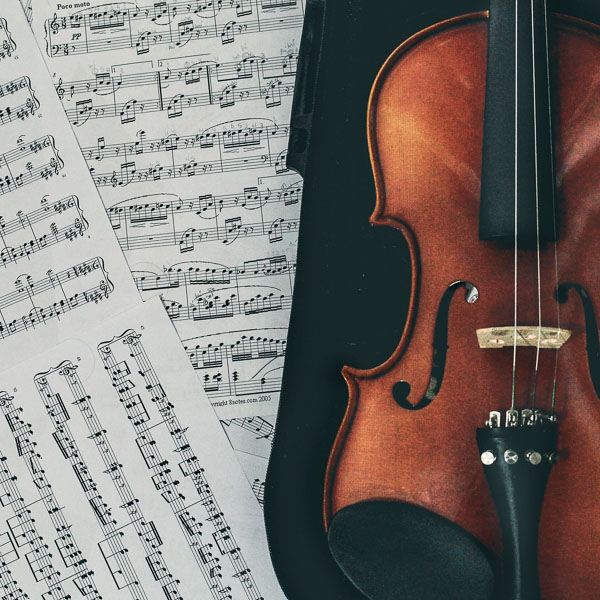 No Comments on Joyce Howard BarrellPosted in Her Stories, Historic Women By Barbara EvansPosted on 3 October 20214 November 2021Tagged composer, musician

Joyce Howard Barrell (née Gedye) was a composer and musician born in 1917 in Bouverie Avenue, Salisbury. Both her parents were from hard-working, prosperous families – her father from a well-known Bristol family and her mother from a pioneering car body building family (Bonallacks) in Stratford, East London. Her father worked for Lloyds Bank but when Joyce was only 3 years old the family moved from Salisbury when he became Bank Manager, firstly in Bridgwater, Somerset in 1920, then Exeter in 1926 and finally in Leicester in 1931. Joyce’s childhood was comfortable and she enjoyed singing and dancing from an early age.  There is a record available of a performance she took part in aged 9.

In the 1930s Joyce studied music at what was then University College, Leicester1.  She studied harmony, composition and piano with Benjamin Burrows and violin with his sister, Grace. She also studied piano accompaniment with Harold Craxton of the Royal Academy of Music in London. As there is no war service record for her in existence, it is likely that she went straight into teaching, mainly guitar and piano accompaniment, throughout the Second World War.  Joyce also began to compose at this time. In 1945 she married a fellow musician and composer, Bernard Barrell, while he was still in the army.  In 1946 they moved to Ipswich, Suffolk, where they lived for the rest of their lives.

Joyce’s speciality was writing music for children and for school orchestras and local amateur orchestras. She worked hard to encourage people of all ages and abilities to play music and sing. She and Bernard worked tirelessly to promote music and singing throughout East Anglia for over 40 years. They had a large network of friends, among them well-known musicians such as Imogen Holst2, Benjamin Britten and Peter Pears. Joyce wrote an enormous number of musical compositions3; most of the manuscripts are now in the Britten Pears Archive. Her final years were marked by increasing frailty and for the last 5 years of her life she was lovingly cared for by her husband until she died in 1989.

For those interested in discovering more details of her life and work, the Britten Pears Archive has a large amount of material: manuscripts, correspondence, family papers, etc.  Details of her life are sparse and apparently no biography of her has ever been published. Joyce is often overshadowed in the literature by her more famous husband, but she deserves to be better known in her own right as one of a large group of English female 20th century composers, most of whose names are sadly unfamiliar today. Joyce was born in Salisbury and the city can be justly proud of this fact and also that she became a major influencer in bringing music to a much wider audience.

1 The college did not become a university conferring its own degrees until the 1950s.

2 Daughter of Gustav Holst, composer, well-known for his orchestral suite The Planets.

3 A list of her compositions can be found here: https://britishmusiccollection.org.uk/composer/joyce-barrell

The Britten Pears Archive can be found at: https://www.bpacatalogue.org/ Use the keyword ‘Barrell’ for access to catalogue of papers, manuscripts, etc.