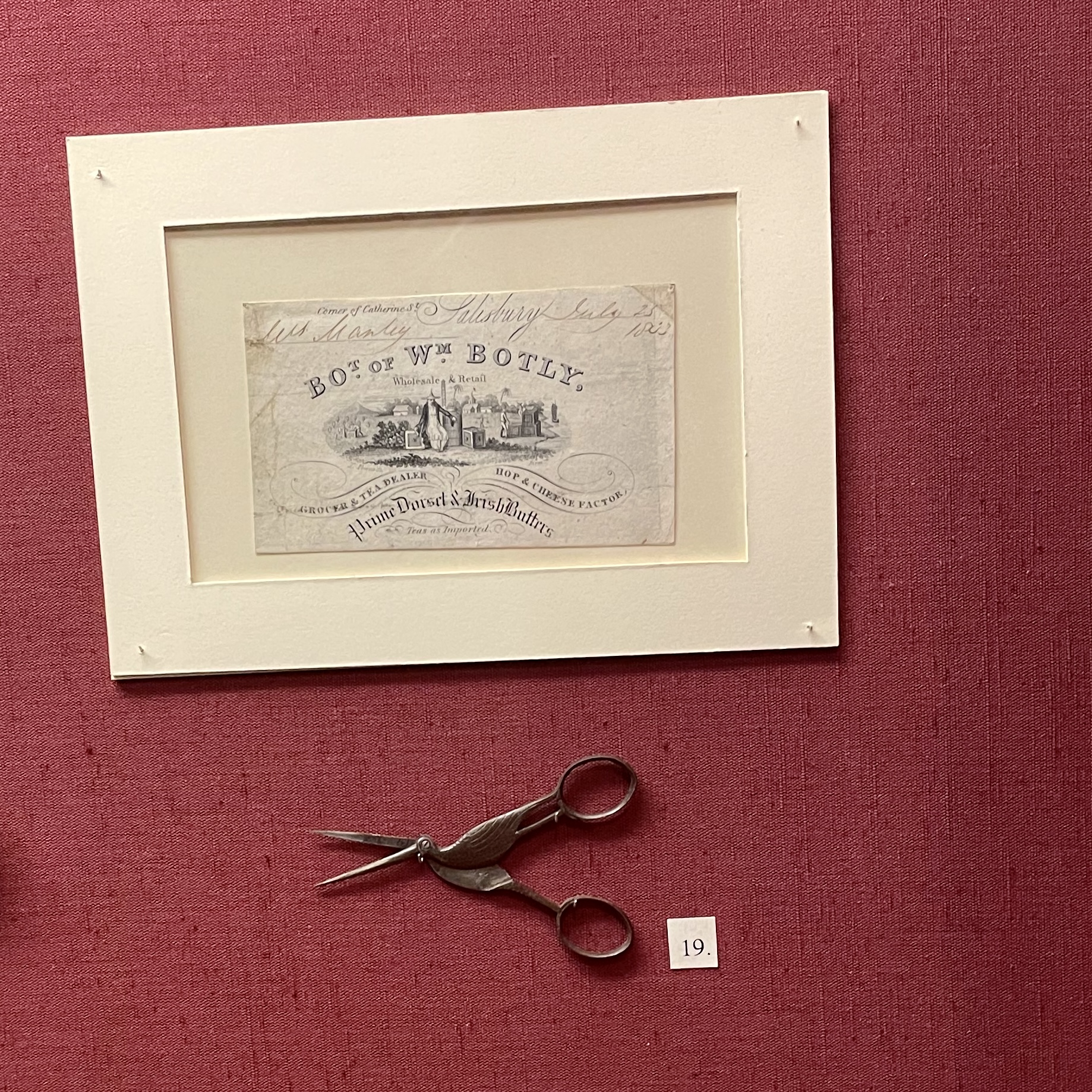 Henry was a respectable businessman, a cutler in Ox Row whose customers included King George III.4  The cutlers were one of the oldest and most prestigious guilds in Salisbury.5  Over the centuries, sword-makers became suppliers of domestic cutlery. After Sheffield and Birmingham developed cheaper products, Salisbury kept its reputation for quality ware.

Henry had family connections to the trade: The Snooks, who were established cutlers in Salisbury, were relatives on his mother’s side.6 Henry’s first wife had died in 1792, but he continued to live in Salisbury7. He married Jane Silverthorne in 1808 and shortly afterwards, their six children were christened together at St Thomas’s Church.8

By the time Henry died in 1828, when Jane was 49, they’d had three further children, two of whom had died young. She and Henry had been running the business with the help of oldest son Henry, now 30, while George (18) was learning the trade and Mary (10) was still at school. Anne (26), Elizabeth (21) and Jane (20) were all unmarried, so newly-widowed Jane was still directly responsible for six of the children. Only William (aged 24) had left home, to become a grocer in Catherine Street.9

After her husband’s death, Jane continued the business in her own name, even though it would have been customary for an adult son to take over as head of the business. Her husband had expanded the business and been the only jeweller listed in Salisbury.10  Two years after her husband’s death, Jane had expanded the business further and was now advertising under her own name as cutler, silversmith & jeweller.11 In 1830 Jane contributed to a display of various local trades for the visit of the Duchess of Kent, the mother of the future Queen Victoria, with some success.12 The Salisbury Museum display of locally made items includes embroidery scissors made in the form of a stork, c1850 and stamped “Botly Sarum” and cutthroat razors made by Botly. Under Jane’s guidance the business grew until the family were running three cutlery businesses: Jane was still running their original premises at 9 Ox Row,13 Henry had taken over the Snook business at Catherine Street,14 and George was running a business in Reading with one of Jane’s grandson’s as an assistant and Mary also living there.15 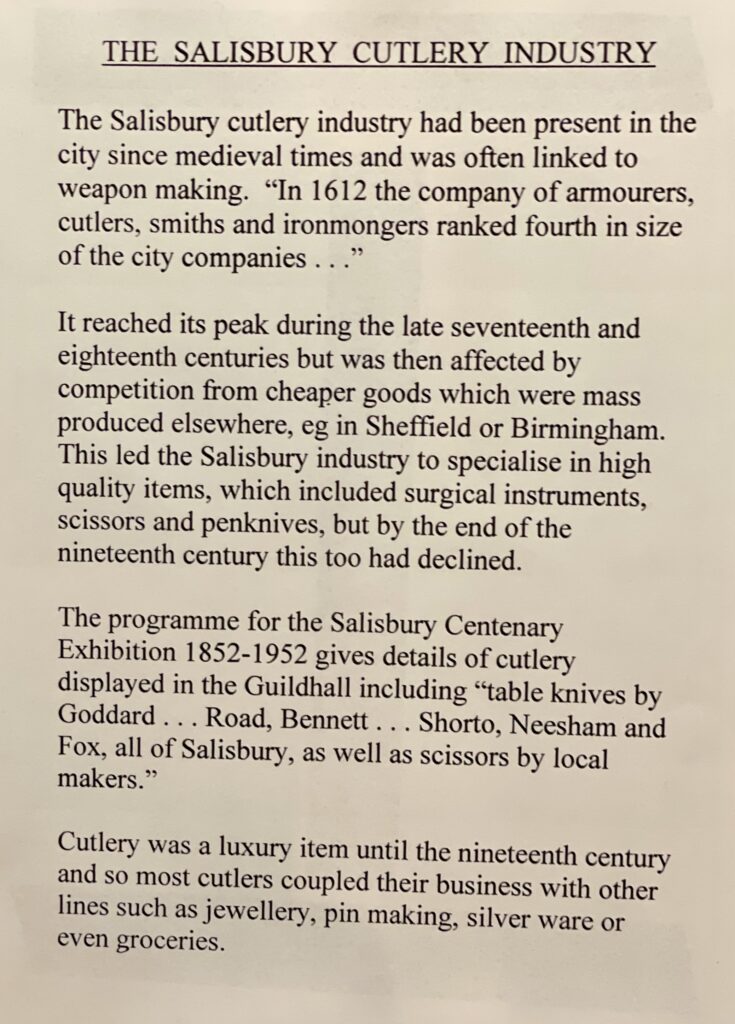 Jane died at the age of 77.16 At that time, her sons Henry and William were still trading in Catherine Street;17 youngest son George was a jeweller and watchmaker in Reading; 18 and daughters Ann and Elizabeth had both made prosperous marriages.19 When she died Jane left her daughters Mary and Jane comfortably off in their old age.20

Jane Botly ran the Ox Row business for 28 years, from Henry’s death to her own, and had enabled one of Salisbury’s most prestigious trades to flourish for another generation.21

Written and researched by Brian Evans, edited by Anne Trevett and S.Ali.

1 Jane was born on 16 November 1779 and christened at the same time as her older sister Betty and younger sister Hester by their parents Ambrose and Hester Silverthorne.

2 Henry was born in 1766 and baptised at St James’s Westminster.

3 They married in London on 30 June 1808, both “of this parish” although the evidence suggests they were both living in Salisbury at the time. Jane marked the certificate with a cross as she couldn’t write her name. The witnesses were S.Botly and [M?].Botly. Henry signed as “Botly” but the certificate was made out as “Botley”.

4 “His Majesty’s most customary commission to the firm was for the making of ornamental scissors for presentation to the ladies of his court.”

6 By 1791 William Snook had taken his son William, aged 34, into partnership in Catherine Street whilst his sister’s son Henry Botly, aged 25, had set himself up in business as a cutler in Ox Row.

Botly and Snook & Son were each listed as Salisbury cutlers in 1791.

The children are recorded as Jane and Henry’s and all were baptized with the surname Botly, but there is something of a mystery about this because of the difficulty with reconciling some of the dates of the marriage and births with the sparse information available in the historical record. For example there is no obvious record of any extra marriage, or any burial records to indicate that Henry had remarried and been widowed again.

12 The Salisbury and Winchester journal printed the following: “Messrs S. and H. Botly also had the honour of selling several articles of cutlery to the Duchess of Kent. Her Royal Highness and Sir John Conroy were pleased to pass the highest encomiums on a superior collection of scissors submitted to their inspection by these manufacturers. The great superiority of Salisbury cutlery has been long acknowledged. (Salisbury and Winchester Journal, 1st November 1830).

15 George was in Reading with one of Jane’s grandsons as an assistant and Mary also living there. John Henry Stevens, Ann’s oldest child, was working there in 1861.

19 Ann married John Stevens, a Bishopstone farmer, who later described himself as a landed proprietor and then a retired maltster, and they had three children.

Elizabeth married George Fletcher, a tailor with premises in New Bond Street, London. The formal witnesses on the marriage certificate were William Snook and his sister Elizabeth Snook. Then Jane Botly and three of her children William, Ann & Jane also signed the certificate. This suggests that George was already a relative within the extended Botly/Snook family.

20 In 1891 they were living together in Southampton with three domestic servants.