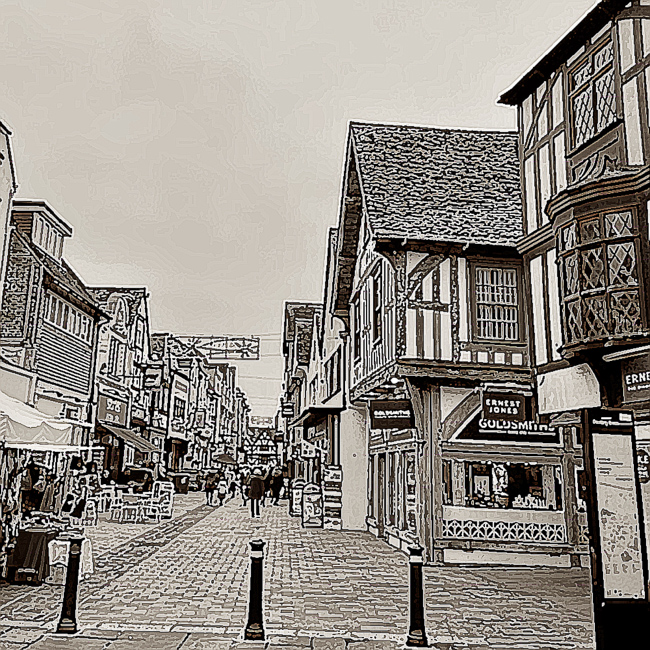 No Comments on Maria SmithPosted in Her Stories, Historic Women By Barbara EvansPosted on 18 February 202218 February 2022Tagged businesswoman, butcher, shopkeeper

This is not just the story of one Salisbury woman, but rather the story of how women were integral to the small family businesses that were the mainstay of the city’s economy in the nineteenth century, with each generation of women providing role models for the next. Maria Meatyard (1807-1894) was 21 when she married Simon Smith in 1828.1 The Smith family were butchers trading from 23-25 Butcher Row for over sixty years. The Meatyards were also butchers, trading from 27 Castle Street, at the entrance to the Free Grammar School, for over a hundred years.

When Maria was 30, her father-in-law died and her mother-in-law Sarah Smith took over the Butcher Row business, guiding it for the next 28 years.2 Sarah initially advertised the business in her own name, but then traded as Simon Smith or as Smith & Son.3 However Sarah was clearly the driving force since a later census listed Sarah as butcher and Simon, aged 41, as butcher’s son and assistant.4 When Maria was 50, Simon died.5 Maria took over Simon’s share in the partnership and the business was then advertised as Sarah & Maria Smith for nine years, until just before Sarah’s death at the age of 76.6

Maria’s father had died the year before Simon’s father.7 Her mother Lydia Meatyard took over the Castle Street business and ran it with the help of two of her sons. John ran the main shop while Thomas, the older son, ran a branch on the other side of the road.8 The business was advertised under Lydia’s name and then under Thomas’s, but Lydia retained control of the business under the terms of her husband’s will.9 She ran it for nine years until her death.10

Thomas and John jointly inherited the business after their mother’s death. They ran it first as a partnership and then as rival businesses on opposite sides of Castle Street until Thomas went bankrupt.11 After John died, his widow Sophia took over the business.12 Maria supported Sophia by offering the help of her most experienced butcher, who then stayed on working for Sophia for 19 years.13

So the two businesses that had been run by Sarah and Lydia were now being run by Maria and her sister-in-law Sophia in the next generation. Maria had already been running the business for nine years with Sarah and now advertised it as Maria Smith & Son, with her son James in partnership. Four years later Maria retired, aged 63, to No 1 Garden Villa, Bemerton leaving James in charge.14 She died at the age of 87, living back in Castle Street, possibly being looked after by Sophia’s daughter-in-law Amelia towards the end of her life.15

When Sophia was widowed she had four children under the age of six.16 She raised her family and also ran the Meatyard’s shop in Castle Street for 19 years, latterly with the help of her son William.17 Sophia died at the age of 58, two years after Maria retired.18

These two businesses were then run by the next generation, Maria’s son James and her nephew William. James Smith ran the Butcher Row shop for 16 years and then his widow Hester continued for another seven years with the help of son Joseph before retiring.19 William Meatyard ran the Castle Street shop for 12 years before leaving a widow, Amelia, with four children under the age of eight.20 Amelia raised her family and also ran the business for a further 21 years, latterly with the help of her son William.21

Moving on to the next generation, Joseph took over the Butcher Row shop in 1894.22 His widowed mother-in-law Charlotte Rowe came to live with them and she started learning the butcher’s trade at the age of 55.23 By 1907 he had sold up and become a farmer in East Wellow.24 William took over the Castle Street shop in 1906 and was there in 1911.25  By 1915 he had sold up and moved to Crane Street, living off the income from his property.26

The story of this family business is reflective of a pattern of activity that was repeated across the city by women in all trades, providing livelihoods for families through the generations.27

Written and researched by Brian Evans. Edits by S.Ali.

1 St Thomas’s parish records, 1828. His father James had to give parental consent as Simon was under the age of 21.

5 The business was then run by Sarah and Maria, with grandson James as manager.

6 Sarah Smith retired and formally passed her share of the business to her grandson four months before she died.

8 In 1841 Lydia and John were living at 27 Castle Street, Thomas was living on the other side at 30 Castle Street.

9 James’s will gave Lydia a life interest in his properties, household goods and all his equipment, stock & debtors of the butcher’s trade. Thomas and John then inherited all of Lydia’s life interest.

11 The partnership between Thomas and John was dissolved after two years.

12 Sophia had run the business for six months after John’s death before putting a notice in the paper. It was the same edition that carried the notice of Thomas’s bankruptcy, so she probably issued it to make clear that hers was a separate business.

15 Maria was living in Castle Street when she died. By then Amelia was running the Meatyard’s shop

17 Sophia took William into formal partnership a week before she died.

21 Amelia took William into formal partnership a year before she died.

22 The business must have been founded after 1808 when Simon was born in London. It was first listed in 1830, so at least 64 years previously. However it could be a lot older. The 1822 classified directory omitted the classification of butchers!

23 Charlotte’s husband had a variety of jobs in Salisbury. She may have helped him in business, but always left her occupation in the census blank. However at the age of 65 she described herself as a retired butcher.

24 Joseph was a farmer at Black Hill Farm, with his wife assisting and his daughter rearing poultry.

25 The business must have been founded by 1804, the first baptism record for James & Lydia in St Thomas’s parish rather than St Edmund’s, so at least 107 years previously.

26 He is listed at 84 Crane Street with occupation “appartments”.

27 Another snapshot of women in business is to look at the sisters-in-law’s siblings. Maria had three sisters and three brothers including John.

At that time, the law was that a wife’s assets belonged to her husband. However there were ways of giving a married woman some independence. Mary, who had married a carpenter from Fonthill Bishop, was bequeathed in her father’s will five shillings a week for life “into the hands of her my said daughter alone, notwithstanding of her said husband, and her script alone, not withstanding her present or any future husband, shall be a good discharge.”

Elizabeth married a grocer in Silver Street and ran the business from the age of 60, when she was widowed, for at least ten years before selling up and retiring on an annuity.

Harriot married a grocer in Winchester Street who died when she was 30. She moved to St Edmund Church Street and worked as a straw bonnet maker to support her young family until her death 12 years later.

James was a butcher in Wilton. After his death his wife Ann sold up and later described herself as a retired butcher rather than a butcher’s widow.

After Thomas became bankrupt he moved to Pain’s Hill, seeking work as a journeyman butcher. After he died his wife Ann lived on for 13 years, describing herself as a needlewoman. This was sometimes a way for a family to support elderly relatives by disguising charity as payment for work.

Sophia had one sister and three brothers. Elizabeth helped their mother run The Wheel Inn at Shrewton while their father was a farmer. Edward farmed at Amesbury while his wife Mary Ann ran The George Inn and posting house. John was unmarried, a grocer in Shrewton. Alfred was a master brewer in Bath, whose wife Caroline was left well provided for after his death.

Crittal, Elizabeth, 1959, A History of the County of Wiltshire, Volume 4. Agriculture & Industry,

Crittal, Elizabeth, 1962, A History of the County of Wiltshire, Volume 6. Old and New Salisbury,

in the City of Salisbury, The Royal Commission for Historic Monuments in England,