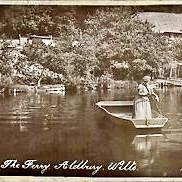 No Comments on Jane HazelPosted in Her Stories, Historic Women By Barbara EvansPosted on 17 July 202217 July 2022Tagged Ferry operator

the index photo was taken around 1917 and shows Mrs Hazel in her long dress and cap operating the ferry across the Avon at Alderbury, Wiltshire.

This remarkable lady was Jane Pricilla Hazel (nee Fry). She was born and christened in 1843 at Alderbury to a local family, Nehemiah and Maria Fry of Silver Street. She joined another local family when she married railway labourer, John Hazel (1825-1886) whose family had owned Ferry Cottage and the adjacent meadow for generations.

The right of way between Alderbury to Britford had stepping-stones but these did not guarantee a dry crossing, especially when the river was in flood, so the punt-like ferry at Shoot End (Shute) was a better option, and cost 1d each way. The River Avon below Salisbury, having picked up flows from the other rivers, could be dangerous: there were reports of persons drowning1, cholera, snakes, as well as poachers with dogs. The Medical Officer of Health2 reported repeatedly about the foul smell and organic deposits and the effects on the quality of the drinking water from his sampling in the vicinity of the Ferry. The crossing was also subject to natural and intended flooding. It was popular with dignitaries and official parties3 travelling to Clarendon Royal Palace ruins, Longford Castle estate and used regularly by LSWR railway workers working at the Alderbury freight line at Milford.

Jane Hazel was widowed young and continued to operate the ferry daily, still living in The Ferry Cottage, Shute End, well into her 70s. She had 10 children, only 6 of whom were living in 1911. Jane is said to have taken Charles Dickens across the river. Maybe this was when visiting Augustus Pugin’s daughter Agnes at St Marie’s Grange or gaining inspiration for Martin Chuzzlewit from the Green Dragon in Alderbury where he stayed, during his many visits to Salisbury. Jane remained in Alderbury until the end of her life and died in 1920, aged 77

Written and researched by Heather Sheeley.

National Archive and Ancestry.com Census and Births, Deaths, and Marriages. And Parish records of Baptisms, banns, marriages and burials.