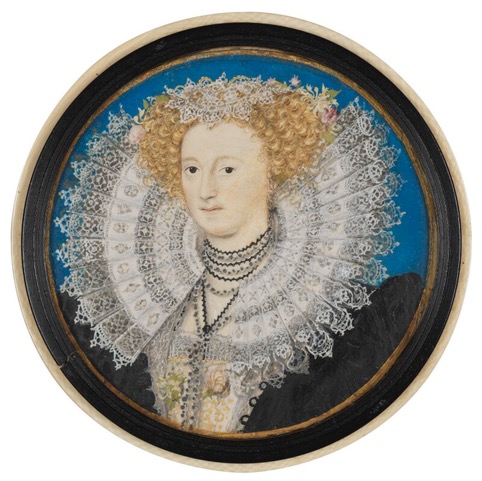 No Comments on Mary Sidney HerbertPosted in Her Stories, Historic Women By Barbara EvansPosted on 23 March 202128 March 2021Tagged Wilton

Portrait by Nicholas Hilliard watercolour on vellum, circa 1590
NPG 5994

Mary Herbert, Countess of Pembroke, was one of the most influential literary figures of the Renaissance era1 and a pioneer woman writer during the late 16th and early 17th centuries. She was responsible not only for providing crucial patronage to writers but also translations during the Reformation2, including a highly regarded version of the Psalms. Mary lived for much of her life in Wiltshire at Wilton House and is buried in Salisbury Cathedral.

Born into the powerful Sidney family in 1561, Mary’s parents held influence with Queen Elizabeth I, the reigning monarch. Mary benefitted from an education rich in Latin, French and Italian – linguistic abilities which were to be key to her literary endeavours. Memoirs also point to an interest in science; clearly her interests were diverse and highly unusual for a woman at this time.  At the age of 15, as was customary in her social class, Mary got married. She became the third wife of Henry Herbert, the rich and influential Earl of Pembroke (who was already in his thirties), in an arranged union. They lived for much of the time at Wilton House, near Salisbury, the Pembroke family estate. Mary bore four children but in an age of high child mortality, sadly both daughters perished but their sons survived. In a tragic twist of fate in 1584, her daughter Katherine, died at three years old, on the same day that her son Philip was born.

It appears that Mary’s brother, Sir Philip Sidney, was instrumental in Mary’s ventures into the literary world. In the late 1500s he dedicated his work ‘The Countess of Pembroke’s Arcadia’ to his sister and they worked together on a translation of the Psalms. After Philip’s death in 1586 Mary was to forge her own literary career, continuing to translate the Psalms, producing 107 translations out of 150; clearly this was a significant contribution. These translations made the Psalms more accessible to Queen Elizabeth and influenced 17th century devotional verse by writers including the widely known poet John Donne.

Mary also published several translations independently; for example in 1590 she translated the French texts ‘Discours de la vie et de la mort’ by Phillippe de Mornay, in support of the Huguenot3 (Protestant cause) and ‘Antonius’, a play by Robert Garnier (this translation is said to have inspired Shakespeare in his writing of Anthony and Cleopatra in 1607). Mary also proved to be a scholar of Greek, translating the ‘Triumph of Death’ by Plutarch. Additionally, it is likely that she worked with Edmund Spenser, considered one of the greatest poets in the English language, on the creation of ‘The Phoenix Nest’ in 1593. She also published in her own name ‘The Doleful Lay of Clorinda’4 in 1595 – it was ground-breaking for an aristocratic woman to put her name to literature at this time and she led the way for other women writers.

Mary continued to write until the death of her husband in 1601. She died of smallpox in London in 1621 and is buried at the family tomb in Salisbury Cathedral – a small brass plaque was installed in 1963 by the Earl of Pembroke to mark the resting place of Mary and her husband.

Researched and written by Nicola MacDonald-Dodin, edits and notes by S.Ali

1The Renaissance (coming from the French word meaning ‘rebirth’) was a period of time in European History following the Middle Ages which marked a time of great social change, an increased interest in Classical learning and values, as well as new ideas in art(including literature), architecture, law, religion and politics. This was notably a significant period of change in English literature. More information can be found at the following link: https://www.britannica.com/art/English-literature/The-Renaissance-period-1550-1660

3 The Huguenots were French Protestants of the Calvinist tradition of Protestantism in the 16th and 17th centuries. In the 16th century they started facing persecution in France due to their religion, and therefore sought refuge in other places, such as England, Ireland, the Netherlands, Germany, Prussia, Scandinavia, Switzerland, and Russia. They even introduced the word refugee into the English language, from the French word réfugié, and were arguably England’s first refugees. They have left a legacy, and many traces of Huguenot history can still be found in the Spitalfields area of East London.  More information can be found at the following link: https://www.huguenotsociety.org.uk/history.html

4This poem can be found on the Poetry Foundation website: https://www.poetryfoundation.org/poems/55242/the-doleful-lay-of-clorinda

A Dialogue between two shepherds, Thenot and Piers, in praise of Astrea (1602)

The collected works are available in a published book and for free online: