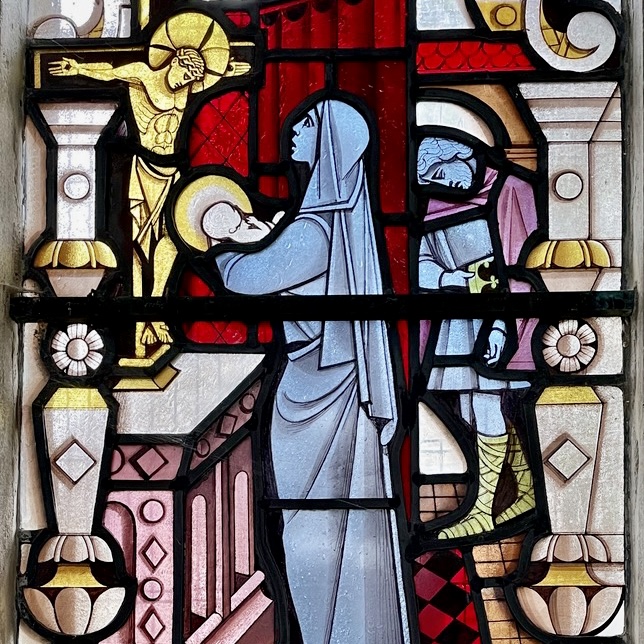 No Comments on Saint Edith of WiltonPosted in Her Stories, Historic Women By Barbara EvansPosted on 2 May 20222 May 2022Tagged princess, saint, seer

Saint Edith of Wilton (also known as Editha, Eadgyth and Eadgith; c. 963 to 984-987) was a princess and one of the most venerated female saints of England. Edith’s story is notable in that most of her influence started after the end of her short life. Her extensive legacy continues to this day: there is a pilgrimage route in her name, and annual devotions take place on her feast day. Edith’s story is a powerful reminder of how history and geography are inextricably linked.

Edith was the daughter of King Edgar the Peaceful, King of England and Wulfthryth of Wilton. Edith was born in Kemsing, Kent, but soon after her birth, her mother took her to live at Wilton Abbey1.

Much of what we know about Edith’s life was documented by her hagiographer, Goscelin, almost a century after her death2. Edith became a nun at a very young age, spending most of her time at the nunnery. She was wealthy, with access to a good education. Her interests were varied and included art, poetry, literature, and history (particularly her own family history). She had a keen interest in fashion and was well-known for her fine clothing3.

Edith was known for her piety and generosity. She founded a church dedicated to Saint Denis4 as well as St Magdalen’s hospital, Wilton, for the poor the care of lepers and outcasts, giving bread, alms and shelter for those in need.

Edith’s royal lineage is noteworthy and Goscelin’s writings highlight Edith’s dual roles as princess and nun. The surviving inscriptions on Edith’s seals identify her as regalis adelpha, or ‘royal sister’, which could be a reference both to her status as a nun and to her being the sister of Edward and Ethelred5.

Also, it is said that Edith had visions which foretold the future. For example when her half-brother Edward succeeded to the throne, Edith dreamt that one of her eyes fell out, and interpreted this as a sign that something terrible would happen to Edward. Indeed, Edward was martyred only 3 years into his reign6. Reportedly Edith declined to succeed Edward when he died, instead choosing to continue being a nun. This meant that Ethelred instead took the throne. She also declined to take up the position of abbess of Winchester, Barking and Amesbury. These decisions highlight the importance she placed on her sanctity and religious identity as opposed to positions of political power.

Edith only lived until the age of 23: she died of a fever on 16 September, around 984. Her body was placed in the church of Saint Denis.

Soon after Edith died, she was venerated as an important saint in Wilton, then the Royal burgh of the Kingdom of Wessex7. Edith’s veneration was promoted by the Kings of England (Ethelred, Edmund, Canute, and Edward the Confessor).

There are several miracles associated with Edith after her death, including her healing of Abbess Elgiva of Wilton’s eye condition (around 1066), and Saint Edith’s miraculous protection of the nunnery and its possessions from intruders. Also it is said that King Canute doubted that Edith was a saint and demanded that her tomb be opened up so that he could decide for himself. To his surprise, the body of Edith rose up and struck him. He was so humbled that he generously endowed the convent with a shrine, which he visited when passing through Wilton. Both King Canute and Ealdred, Archbishop of York, found that Saint Edith saved them during storms by calming the sea8.

As well as Edith’s religious and spiritual legacy, there are many ways in which her memory is associated with specific places. For example, Edith is still much venerated at Kemsing, her birthplace, which has a beautifully adorned clock and statue dedicated to her, as well as an ancient holy well bearing her name9. On the 16th of September (Saint Edith’s feast day), annual devotions take place on the Pilgrim’s Way in Kemsing. In Wilton, the Abbey10 was dedicated to Edith, and St Mary’s Church has stained glass windows depicting Edith11.

Further afield, several churches were dedicated to Edith, including the Church of St Editha at Baverstock, and St Edith’s Church, Bishop Wilton (Yorkshire). To our knowledge there are around eighteen more churches which may also have been dedicated to Saint Edith of Wilton, although the exact number is difficult to verify12. Moreover, in September 2021, a new pilgrimage route, St Edith of Wilton Way, was launched in her honour. It stretches 40 miles from Wilton to Bath, and there are several churches named after her on the route13. This is perhaps the best illustration of how Edith’s memory lives on in time and place.

Researched and written by Heather Sheeley and S.Ali.  Edits by S.Ali.

1 It is said that Wulfryth was carried off from Wilton Abbey to Kemsing, where she had Edith. She became a nun and later went on to become abbess of Wilton Abbey. Wulfryth outlived Edith and both her and Edith were venerated as saints.

Wilton Abbey was a Benedictine abbey and one of the main nunneries in England.  https://www.heritagegateway.org.uk/Gateway/Results_Single.aspx?uid=214695&resourceID=19191

2 Goscelin of Saint-Bertin was a Benedictine monk of Flemish origin, and around 1080, he wrote Edith’s hagiography. His ‘Legend of Edith’ consisted of two parts: the Vita Edithe (about Edith’s life) and the Translatio, which was about the events after her death.  It is said that much of the information in Edith’s hagiography was sourced by Goscelin from oral histories passed down by the nuns of Wilton Abbey. Anglo-Saxon nunneries were important centres of women’s education which gave their inhabitants – both nuns and the laywomen who were educated there before going on to marry – access to opportunities for learning. This is particularly true of Wilton Abbey; the fact that Goscelin was their chaplain and wrote Latin works for them, probably at the instigation of the nuns themselves, is a testament to their interest in history and their active participation in the production of literary texts.

3 Goscelin wrote about how Edith responded when she was chastised by the bishop for wearing elaborate clothing to church. The clothes also survived a fire at the monastery. More details can be found at the British library blog: https://blogs.bl.uk/digitisedmanuscripts/2017/06/making-a-good-impression.html

4 The Archbishop of Canterbury (later Saint Dunstan) attended the consecration, when he noticed how Edith crossed herself. He took hold of her right thumb and said, “Never shall this thumb decay.

Indeed, after her death, her thumb was found to be incorrupt. It was later enshrined separately.

5 More on Edith’s seals can be found at this British library blog: https://blogs.bl.uk/digitisedmanuscripts/2017/06/making-a-good-impression.html

6 The political implications of Edith’s prophecies are explored in the book ‘Anglo Saxon Saints’ Lives as History Writing in Late Medieval England’ by Cynthia Turner Camp.

7 Royal saints were common at the time, as the divine nature of monarchical dynasties were intertwined.

9 There is another ancient well bearing her name in Stoke Edith, Herefordshire.

10 The Benedictine Abbey at Wilton was destroyed in the reformation and lies under Wilton House, Wiltshire.

Pages 28-33 A History of the County of Wiltshire: Volume 6. Originally published by Victoria County History, London, 1962.

Lambertson, Isaac, About St. Eadgyth of Wilton, Abbess of Wilton. Commemoration of Our Venerable Mother Edith of Wilton: http://orthodoxengland.org.uk/servedith.htm

Keynes Simon The cult of King Edward the Martyr P 124