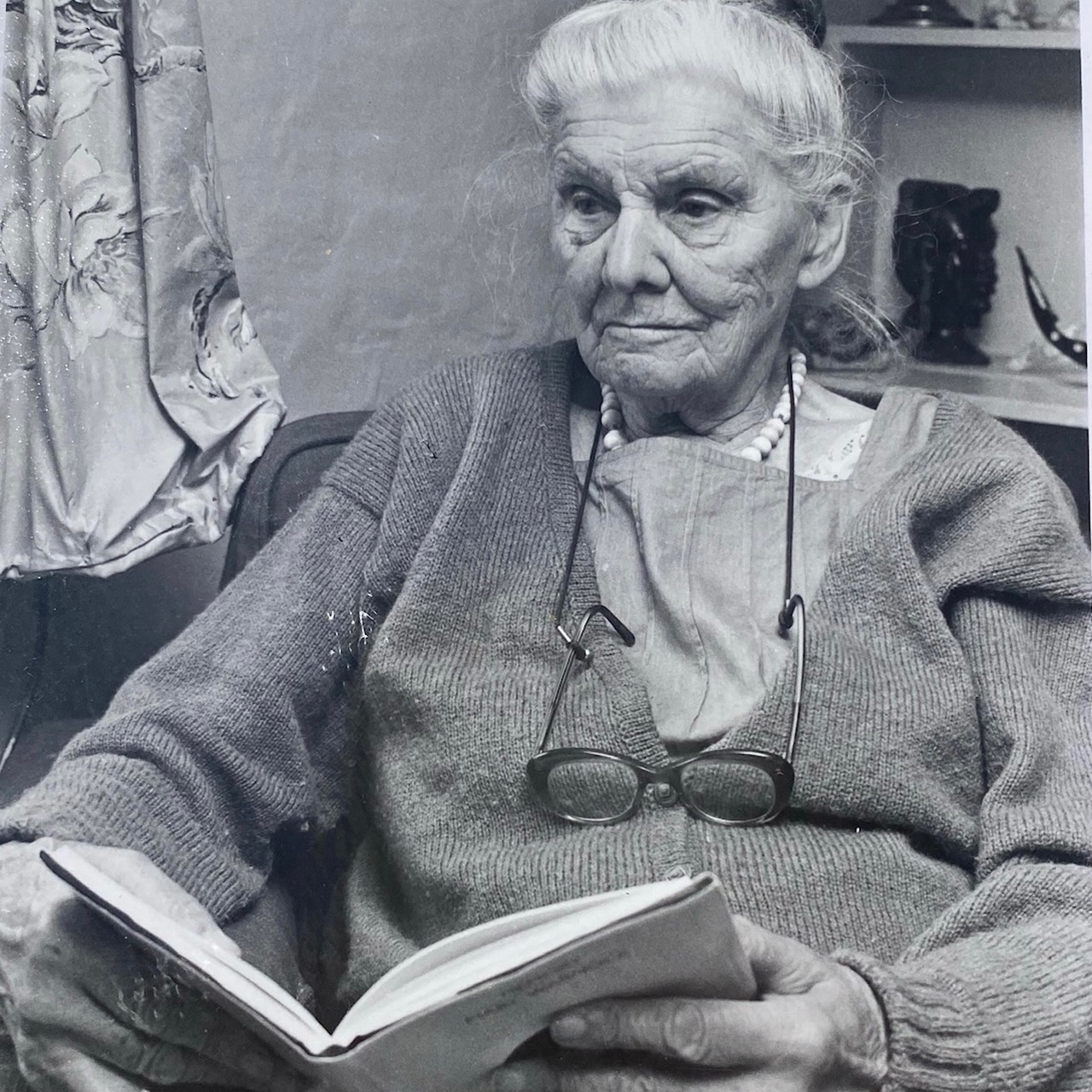 No Comments on Salome PellyPosted in Her Stories, Historic Women By Barbara EvansPosted on 23 May 202125 June 2021Tagged medicine, Philanthropist

This page is a little different from the others about historic women in that two of Salome’s children have been actively engaged with the process. Her son Hugh has helped with the research for the article and her daughter Robina has made a podcast (which you can find below the article) which really brings her mother’s story alive! We would like to thank them both for their help.

Dr Rosa Salome Pelly, also known as Sal, was a no-nonsense yet warm-hearted woman, she had a  privileged start in life, as a descendant of the poet William Wordsworth1 and daughter of the Bishop of Salisbury. Throughout her life, she was known for her generosity and altruism: she used her skills to help people, for example as an accomplished doctor, and by giving refuge to those in need.

Born at the Bishop’s Cottage, West Lulworth, where her family usually spent their holidays , Salome grew up in the Bishop’s palace2 in Salisbury. Her father was the Rt Rev. John Wordsworth (1843-1911) who was Bishop of Salisbury from 1885-1911 and founded Bishop Wordsworth’s School. Living in Salisbury’s Cathedral Close amongst influential neighbours, Salome had her own adventures, climbing to the very top of the Cathedral Spire, up the dizzying internal wooden ladders. Salome wrote vividly about idyllic and memorable experiences she had as a child living in the Bishop’s Palace such as looking on at the view over the garden to see the sheep heading through towards the market, and the processions passing by during event days.

Her life abruptly changed at just 11 years old, at the death of her father. In changed circumstances, she and her five siblings left Salisbury, for Lulworth, where she would spend her teenage years. Salome was often found outdoors, scrambling around the downs and rocky coves. She started school at the age of 16, at her own insistence, knowing that she needed further education if she were to achieve her ambition of becoming a doctor. She succeeded, and went on to study medicine at Oxford University. She was a student at Lady Margaret Hall, which was founded by her aunt, Dame Elizabeth Wordsworth. The same college was attended by her sister Faith, and later by Salome’s daughter, Rosa Jane. She gained the qualifications of BM, B.Ch. (Oxon), as well as MRCS Eng and LRCP Lond (Oxf. & Char. Cross). Shortly after graduating, Salome married The Rev Richard Lawrence Pelly (Dick) in 1927, and went with him to India. There, in Darjeeling and Calcutta, she was a registered doctor in her own right, and supported his role as a headmaster, lending practical help to the pupils.

On returning to England in 1934 the couple lived in London’s East End, and then in Newcastle upon Tyne. They did their best to help alleviate hardship faced by people living in both communities. Just before the Second World War, Salome set up home in rural Northumberland., while Dick remained his diocesan post in Newcastle. By then they had 5 children, their ranks quickly swelled by many others, who were effectively evacuees3. In addition, on her first day in Dr Pelly’s new home, the local doctor announced his intention to leave his GP practice in her hands as he enlisted. Salome accepted the challenge, which involved being out and about at all hours of the day and night, sometimes travelling to needy patients on horseback, or once, hitching a lift in a army jeep!

In 1944 the family moved to Trowbridge, and it was there in 1945 that their sixth child was born. Here Salome again worked as a locum  GP  and her husband became Rector of Trowbridge .

She continued working as a locum following their move to Salisbury until she set up a practice with her son-in-law Tim Hattersley in 1964. Her medical career continued to burgeon. She continued to develop her interest in psychiatry and worked a registrar at the Old Manor Hospital. During this time she was also a founder member of the local branch of the Samaritans. She continued to uphold her  socialist principles throughout her entire life and in her 70s she stood for the Salisbury Labour Party in local elections.

Salome’s interests were varied: she was a voracious reader a  theatre goer, a skilled gardener and a prolific artist.  She displayed a distinctive style in her painting, and was a member of the Salisbury Group of Artists. She was a happy resident of Harnham for the last 20 years of her life. She died in 1995, leaving strong and fond memories with the many people who knew her, and having made a lasting practical difference to the lives of many.

Robina has asked us to include these clarifications to the podcast

On the day her father died my mother and her brothers and sister were in Victoria Park eagerly awaiting “The Dance of the Scots Greys” (not the Grey Guards).

My mother at 16 told her mother she wanted to go to school and suggested St Felix, Southwold.

When they came home from India my father became the Vicar of Shoreditch and the family lived in Hoxton Square.

He then got the job of Diocesan Education Officer in the diocese of Newcastle on Tyne.

When I had the scarlet fever the doctor said I must be nursed in a room with a carbolic curtain over the door.

In 1939 when my mother appeared in Rothbury, Dr Armstrong asked her to take over his practise so he could lead others in Rothbury to enlist.

In 1945 my mother made friends with the only other woman doctor in Trowbridge.

After Trowbridge we moved to Farley Wardenry (not Hospital). There my father worked with the Charity Commissioners.

My mother said “I asked Katherine Trevelyan to stay, thinking it would be a few weeks, but my heart sank when she brought her own bed”.

When my mother was 90 she applied for a parking permit. (I think a blue badge is given to a qualified guide).

The letter I have [is] from William Wordsworth the poet to his great nephew Christopher Wordsworth, Bishop of Lincoln.

You may like to add this: My mother was born in 1900 when people were fed up with the Boer War and little girls were often given the name “Irene”, the Greek word for peace. The Bishop of Salisbury went one better and christened his baby daughter Salome, the Hebrew word for peace! Most people only think of Salome as Herod’s wife.

The Her Salisbury Story project team would like to extend their thanks to Robina Hattersley for her time in being interviewed for the project and for providing photographs and resources, and to Hugh Pelly for additional family history and insight into Dr Sal Pelly’s life, and for comments on an earlier draft of this profile.

We would also like to thank Salisbury Journal for their kind permission to use obituaries, articles and photographs.

1William Wordsworth was an English Romanticist poet; well-known for his lyric poem which starts with the immortal line ‘I wandered lonely as a cloud’. More about William Wordsworth can be found at the Poetry Foundation website: https://www.poetryfoundation.org/poets/william-wordsworth

2The Bishop’s Palace is a historic building dating back to the 13th century. It has undergone many alterations and refurbishments and has been used by the Cathedral school since 1947. Also the Bishop’s Palace is mentioned in the profile of Charlotte Anne Elizabeth Moberly on our website, as her father was George Moberly, Bishop of Salisbury during the late 19th Century. https://hersalisburystory.com/stories/historic/charlotte-anne-elizabeth-moberly/

3Evacuees were people (mostly children and mothers with very young children) who had to move away from their homes in British cities during the second world war, because of the threat of bombing. Most of them moved to the countryside or rural areas (some families in Wiltshire hosted evacuees from Portsmouth and Southampton). More information about evacuees can be found at the following link: https://www.iwm.org.uk/history/the-evacuated-children-of-the-second-world-war and stories about evacuation can be found on the BBC’s WW2 People’s War pages: https://www.bbc.co.uk/history/ww2peopleswar/categories/c1162/