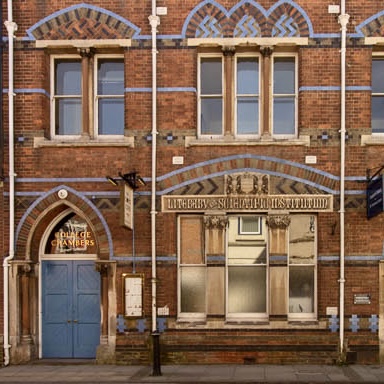 No Comments on Frances HalePosted in Her Stories, Historic Women By Barbara EvansPosted on 4 June 20214 June 2021Tagged builder, victorian

Frances Hale 1818-1881 (née Read) was associated with the builder’s yard at 36 Castle Street for her entire life, from newborn baby to matriarch of a workforce of over 400 people.

Born into the building trade

Frances Read, born in 1818, was one of six children raised by George and Ann Read in the family home that was part of the yard.1 When she was 22 she married Raymond Hale, a carpenter, who was probably one of her father’s workmen, and they lived in Bedwin Street.2 When she was 28 her mother died, and her father then retired and passed the business over to Raymond.3 Six years later Frances was back living at the yard.4 In Bedwin Street Frances and Raymond had five children who all died young.5 In Castle Street they had two further children, Henry and Edward.6 Raymond expanded the business to become a builder employing 17 people.7 However, when Frances was 51, Raymond died. At that time her sons were 16 and 15 and already working in the business.8

Frances took over the business after Raymond’s death. Her announcement in the Salisbury and Winchester Journal (1869)9 was carefully worded to reassure customers that the business would be carried on. It said that the business would be continued by the late Raymond Henry Hale’s widow and his eldest son (Henry, 16) and assisted by Mr Abley, Raymond’s foreman. Both Raymond and his eldest son had been christened Raymond Henry, so using the full name emphasised the continuity from father to son. In 1875, Frances put out another announcement which struck a very different tone10: it was clear that the business had been hers and was now hers with her sons as junior partners.

Two of the most striking Victorian buildings in Salisbury were constructed by the business run by Frances. The Literary and Scientific Institute was built in the free gothic style and replaced the demolished New Street Theatre. It included Hamilton Hall for lectures, concerts and theatre, together with classrooms, reading rooms and staff accommodation.11 Richardson’s Wine Stores in the High Street was built in the Italian gothic style for a long-established Salisbury firm, claimed to be the largest and oldest wine merchants in Britain. It included offices, tasting rooms, bottling and packing facilities, as well as extensive cellars for wines, beers & spirits and rooms specially designed for cigar storage.12 These were two of the most significant new buildings anywhere in the city during the six-year period that Frances ran the business alone, between taking over from her late husband, and bringing her sons into partnership.

During this six-year period Frances had substantially increased the firm’s business. The contract for the Institute was won 14 months after Raymond’s death.13 The Richardson building was completed a month before Frances took her sons into partnership.14 She worked with the long time City Surveyor, J.C. Bothams, on the Institute building.15 In between these two projects were others which impacted the public life of the city and surrounding area. These included building Durnford village school & schoolhouse, building the Baptist schoolroom in Brown Street and restoring Dinton church.16 She worked with the cathedral’s architect, the renowned G.E. Street, when she restored Britford church and again, three years later, when she built the western transepts of St Peter’s church in Bournemouth.17 This grade I listed building is considered one of the finest Gothic Revival churches anywhere in England.18 Under Frances, the business had swiftly expanded its scale of operations and its reputation. By comparison the only project reported in the newspapers during the 23 years that Raymond ran the business was the restoration of St John’s chapel, Ditchampton, a year before he died.19

A year after the partnership was formed, they built the north aisle of St Paul’s church, an extension to cope with the increased population of Fisherton.20 Three years later they built the Congregational Church in Fisherton Street to replace the small chapel in Endless Street.21 Tellingly, the newspaper reports called the business “Mrs Hale & Sons” rather than its official name. She arranged Christmas parties and summer outings for her men; but made sure they were reported in the paper to aid recruitment.22 There was even a “Mrs Hale’s Carpenters XI” group playing matches against local cricket clubs.23

In 1876 they won the contract to rebuild the Alderbury Union workhouse in Coombe Road, with the lowest of the five tenders submitted.24 Their workforce expanded from 80 to 400 within a year.25 Some of the bricklayers said they were overworked and went on strike, demanding a pay increase of a half-penny an hour. The ringleader then quit, the firm withheld his pay for the part-week worked, and he complained. The magistrates’ court found in the worker’s favour and the firm had to pay up.26 The firm may have had problems getting paid since the Alderbury Union was, in 1879, seeking a loan of £2,771, guaranteed against future income streams of poor-relief, to be paid back over thirty years.27

Also, having set up a base at Coombe Road they then fitted out Castle Street to support this larger business.28 Costs ran out of control and in 1880 the firm was declared bankrupt.29

The business was sold, but they were allowed to stay on in the accommodation at the yard. A year later Frances died, aged 63.30 Henry moved to Kent and got work as a surveyor31 and Edward set up a small business in Salt Lane.32 Within five years Edward had reacquired the old premises and Hale family builders were once more trading from 36 Castle Street.33

Written and researched by Brian Evans. Edited by S.Ali.

1 She was baptised at St Edmund’s, with her father shown as a carpenter living in Castle Street

2 They married in St Edmund’s where Raymond was sexton, and this was his occupation on the marriage certificate. However he was a carpenter in the census a year later

3 George retired to Britford where he died two years later.

9 ‘Notice is hereby given – That the business of carpenter and builder in Castle Street, Salisbury, carried on by the late Mr Raymond Henry Hale, will in future be conducted by his widow and eldest son, with the assistance of an experienced foreman’.

10 “Mrs Hale begs to inform her customers and the public that she has taken into partnership her two sons, Mr Raymond Henry Hale and Mr Edward Hale. She takes this opportunity of thanking her Friends and Customers for the patronage and support she has for many years kindly received, and ventures to hope that the same will be extended to the new firm, who will in future carry on the business under the style of ‘Hale and Sons”

15 The Historic England listing has A. C. Bothams as the architect. However as he was only ten at the time it is more likely to have been his father, J. C. Bothams, who was City Surveyor for 48 years. His son, who took over that role, may have designed the Tudor style extension in 1900

G. E. Street was sometime Professor of Architecture at the Royal Academy and also RIBA president

The church was built in phases, as finances were raised, between 1855 and 1879, with G. E. Street supervising his masterplan throughout. In this phase, the nave was extended, with transepts, to connect to the tower which had been built in an earlier phase

24 The fixed price contract was for £13,725. The five bids ranged up to £17,840. There was no significant inflation at that time to put extra pressure on costs, but to increase staff levels so rapidly they may have had to pay above the going rate.

Under the poor law system of England during this time, people lived and worked in workhouses if they were unable to support themselves or were too ill or unable to work. During Frances Hale’s time, the system was undergoing many changes. For more information about poor laws, check the further resources section on our profile on Joan Popley.

31 Henry had married Joanna Jeans, daughter of the master of the Crane Street workhouse. They had two sons and lived in Park Road, before moving to Sidcup

32 Edward married Annie Tewkesbury, a Salisbury schoolmistress, a month after his mother died and they lived at 73a Castle Street, next to the Avon Brewery, with works premises in Salt Lane

Workhouse, The Story of an Institution, http://www.workhouses.org.uk, accessed March 2021