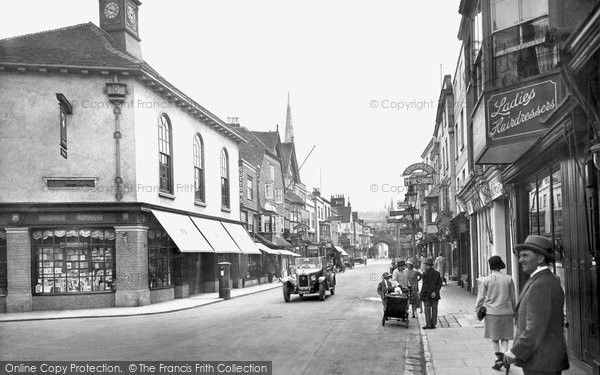 No Comments on Eleanor BryantPosted in Her Stories, Historic Women By Barbara EvansPosted on 19 February 202219 February 2022Tagged bricklayer, business

Eleanor Bryant (1808-1876) was  a businesswoman who took over her late husband’s bricklaying business and ran it for 17 years. Unusually for the time, she was open about being a businesswoman with a family to support.

Eleanor Hawkins was born in London.1 At the age of 27 she married John Bryant, a 40-year-old widower, in Salisbury Cathedral.2 John had two properties in the High Street, later numbered as 26-28.3 Three tenant families, including the foreman of John’s bricklaying business, lived in Bryant’s Yard at the front, while Eleanor and John lived in Avon Cottage at the back, facing the river.4 Their daughters Helen and Anne were six and five years old, with Emily just 14 months old, when their father died in 1844.5 So at age 36 the newly widowed Eleanor, with three daughters under the age of seven, needed to consider her options. She placed an advertisement in the local paper which read:

Eleanor had the support of her husband’s foreman George Young and his wife, who lived alongside her at Bryant’s Yard and had children of the same age. Many widows, out of necessity, continued running their husband’s business. What made Eleanor unusual was her chosen public profile. She could have traded under her husband’s business name; she could have put her foreman’s name on the business but effectively run it herself; she could have portrayed herself as a hard-nosed businesswoman, ready to compete in a man’s world. Instead, her advertisement made clear that she was in charge and that she had a family to support. No man would have included such detail in a trade advertisement.

John’s foreman, George Young, had been raised by an unmarried mother and orphaned at fifteen.6 From then on he had probably lived and worked at Bryant’s Yard. John Bryant was clearly his mentor, as George gave two of his children the middle name Bryant. When Eleanor was trying to keep John’s business going, George was her key helper – 30 years old, a bricklayer for half his life, and totally loyal to the Bryant family. Relying on customers’ chivalry may have tided her over for a few months, but she needed to build a reputation and to advertise. The first directory we have, in 1849, has Eleanor as one of three women in 41 entries for building trades.7 The business was still quite small, employing four men.8 And then the railway came to Salisbury.

The railway line from Milford to Eastleigh opened in 1847. Nine years later and lines from Fisherton to Westbury and from an adjacent Fisherton station to London via Milford and to Yeovil opened in quick succession.  This brought prosperity to Salisbury, and expansion and the 1850s were an opportunity for Eleanor. Her workforce increased from four to sixteen.9

She had continued all John’s “branches” of bricklaying, plastering, slating and supplying building material. She had by now built up some capital, enabling her to fund land purchases. Unlike surrounding parishes, Fisherton Anger did not have large landholdings by aristocratic families. It was easier to buy land and build.10 Eleanor moved the business to Fisherton and was associated with several addresses there during this period.11 Then in 1861, at the age of 53, having run the business for 17 years, she sold it to George and ostensibly retired.12

She was also involved in supporting her future son-in-law, Charles Moody. His father had been a labourer working for Eleanor’s bricklayers. She had helped him set up business as a baker and by the time he died he had the social status, according to the probate records, of ‘gentleman’.13

She helped Charles, after his marriage to Helen,14 to set up in business as an accountant and second-hand furniture dealer.15 He expanded on that, becoming a very successful Land, House & Estate Agent, and was involved in civic affairs that would lead to him becoming a magistrate and city councillor.16 Meanwhile Helen raised ten children with the help of several servants and Eleanor would have known eight of her grandchildren.17

After retiring, Eleanor described herself as a proprietor of houses, suggesting that she still owned some of the houses she had financed and built. At that point she was living at 21 Wilton Road with daughters Anne and Emily.18 As Eleanor’s business grew, Bryant’s yard became fully utilized for trade, and George too had moved, to a house in Milford Street.19 After taking over the business, this became his business address, but he kept on Eleanor’s workshops in the High Street and in Fisherton. Over the next ten years George expanded the business slightly, from 16 men to 18, During this period he started to advertise as a builder, not just a bricklayer, and built up significant capital in the business. Interestingly, ten years after selling up, Eleanor described herself as a builder’s widow even though John, like Eleanor and George after him, had always been a bricklayer.20

This suggests that Eleanor, in retirement, was still financing some of George’s projects and had also upgraded herself to “builder”. Eleanor died in 1876 aged 68.21 By then she was living back in Avon Cottage in the High Street, with Anne and Emily, where it had all begun.22

Researched and written by Brian Evans. Edits by Anne Trevett.

1 She was born on 2 September 1808, to John and Eleanor Hawkins, and was christened on 16 October. There is no obvious record of her again until her marriage.

2 She was “of the chapelry” of Salisbury. He was a widower of St Thomas’s. He may have been christened in St Martin’s in 1796, the son of Jeremiah and Ann Bryant. That could explain why he was buried there. However, the 1841 census shows him born in about 1796, but not in Wiltshire. There is no obvious record in Wiltshire of a first marriage or death of a first wife.

3 The properties are listed in his will, the second being leased to Mrs Butler. The numbering is deduced by studying census records of it and neighbouring properties and their occupants from 1841 to 1871 when street numbers are first used.

6 George Langley Young was born in 1814 and baptised in 1818, the son of unmarried Eliza Young of Gigant Street. Eliza Young died at Bugmore in 1830.

7 There were 8 builders, 13 bricklayers, 6 carpenters, 3 plasters and 11 painter/glazier/plumbers. Mrs Henrietta Davis, a builder in Castle Street, and Mrs Mary Peniston, another bricklayer, in Winchester Street were the only other women

10 Along the Wilton Road, blocks of land had been sold off piecemeal for speculative building.

11 In February 1861 the advertisement of the sale of the business was from Prospect Terrace.

In the census in March 1861 she is living at 21 Wilton Road which, together with number 19, was known in 1880 as Gladstone Place. In a directory of 1865 Gentry, her address is 1 Alexander Place, Wilton Road. In 1871 daughter Anne is lodging with the Sims family at Hill View Cottage, 16 Windsor Road.

He is listed as ‘gentleman’ in the Salisbury Probate registry, 23 November 1878.

If he’d stayed an illiterate labourer, and stayed in strong health, he might be earning £30 a year rather than leaving an estate of £800. This is based on Mulhall’s calculation for 1880. By comparison an unskilled woman might earn £15 a year:

16 1889 Kelly’s directory of Wiltshire lists his business and his civic offices; Salisbury probate register 3 April 1894 valued his estate at £5,705

17 There were two live-in servants. The last two grandchildren were born in 1877 and 1879, after Eleanor had died.

19 George and his family lived at 67 Milford Street in 1851. The High Street property was listed as Bryant’s Yard with four households in 1851, as “Passage” with two households in 1861, and as just Avon Cottage with Eleanor’s family in 1871.

22 Her estate was valued at £800. This suggests she had already substantially provided for her three daughters before her death. Anne and Emily continued to live at Avon Cottage, ladies of independent means.

Crittal, Elizabeth, 1959, A History of the County of Wiltshire, Volume 4. Agriculture &

Crittal, Elizabeth, 1962, A History of the County of Wiltshire, Volume 6. Old and New

Royal Commission for Historic Monuments in England, 1977, Ancient and Historical

Monuments in the City of Salisbury, The Royal Commission for Historic Monuments in