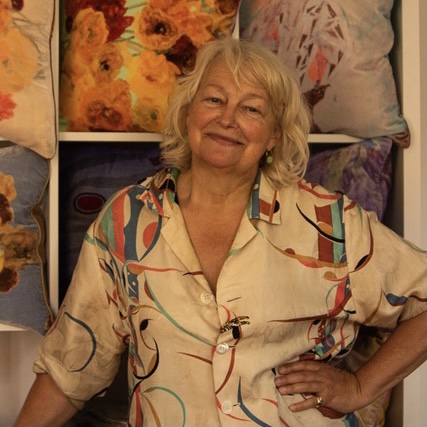 No Comments on Georgina von EtzdorfPosted in Contemporary Women, Her Stories By Barbara EvansPosted on 29 July 202130 July 2021Tagged Artist, designer

Georgina was born, and spent her early years in Peru, where she was struck by the  vibrancy and colour of the country. Even at the tender age of six, on leaving South America to live in England, she was aware of the stark contrast between her old and new homes.

Later, this influenced her decision to train to work in the world of textiles and she attended Camberwell School of Art, bringing that early love of colour into her work; something which has pervaded it ever since. It was there, too, that she met fellow art students Jonathan Docherty and Martin Simcock.

After graduation Georgina  continued to explore use of colour and dyes in the kitchen of the family home in Great Cheverell, near Devizes, and her long suffering mother used to discover fabrics draped all over even the most obscure places in the house. Joining forces with Jonathan and Martin proved the birth of the company and, in 1981, they started designing and printing their dramatic, eye-catching fabrics at a 19th century barn at Odstock near Salisbury.

In I986 they  opened a first London shop in Burlington Arcade and a second in 1988 in Sloane Street. By the mid 1990s , the Georgina von Etzdorf brand was selling in 400 shops in 25 countries around the world and had concessions in New York , Paris and Tokyo.

Their clothes graced the pages of Vogue, Ella , Tatler, Marie Claire, and more, and their fabrics could be found in the wardrobes of rock starts and royalty. Princess Diane wore von Etzdorfs  ‘Poppies’ design and Mick Jagger, Paul Mc Cartney , Bob Geldorf, David Bowie, Meryl Streep and others invested in numerous GvE  pieces over the years.

And the ultimate design accolade came in 1997, when Georgina was appointed an RDI (Royal Designer to Industry) by the Royal Society of Arts. 1996 she was awarded an Honorary Doctorate of  Design by Winchester School of Art and she was made an Honorary Fellow of the University of Arts, London, in1999.

Now after a hiatus of some ten years where they followed other projects, Georgina and Jonathan have come together again to launch GvE&Co  with the same ethos of creating things of colour and vibrancy married with function and useability, but homewares rather than fashion: fabrics, furnishing and upholstery. And they have chosen to do it near their orginal home: in Wilton, at the Guild.

They very much look forward to introducing a new generation of clients to the delights of beautifully -designed, British-made, individual and long lasting pieces. A warm welcome awaits.