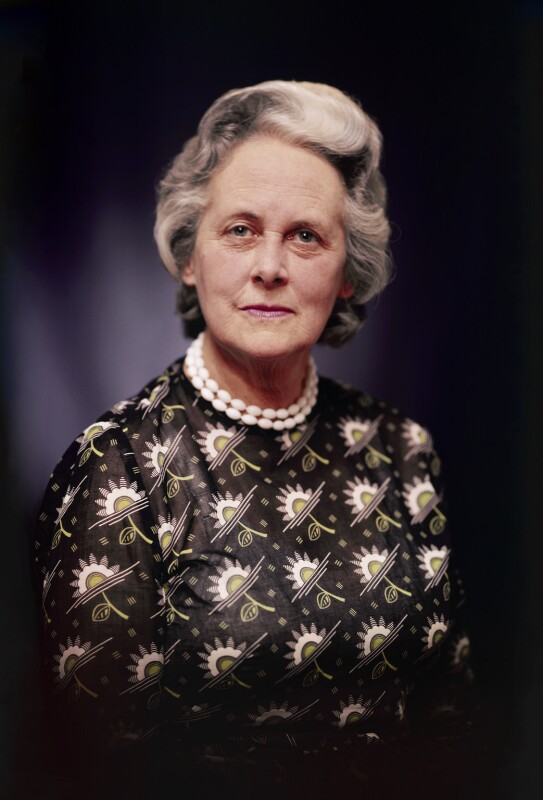 No Comments on Dame Muriel Diana Reader HarrisPosted in Her Stories, Historic Women By Liz BattenPosted on 19 August 202119 August 2021

Dame Muriel Diana Reader Harris influenced education, the Church of England, and the arts throughout the twentieth century. After a busy career based in Dorset but interspersed with international travel, her retirement, mostly spent in Salisbury, was no less active. She had a genuine interest in people, believing that everyone had something of value to give. All her life she used her concern for others to enrich their lives.

Born in Hong Kong in 1912, Muriel Diana Reader Harris attended Sherborne School for Girls as a teenager. She won a place at the prestigious Cambridge University, but her father did not believe it was appropriate for her to attend without a scholarship. Not feeling daunted by this, she instead gained a first-class degree in English from London University, through what we might now call “home learning”.

She returned to Sherborne School to teach, demonstrating her determination once again when during the Second World War she led a party of pupils to Toronto, Canada, for a safer life away from the war. Returning to the UK in 1943, she became headmistress, and contributed to several educational organisations. As President of the Association of Headmistresses, she led their response to the Plowden Report in 19671 which examined primary education. She has left a legacy at the school, with two buildings named in her honour2.

She was heavily involved with the Church of England, and continued even during her retirement. She was President of the Church Mission Society from 1969-82 during a period of great change. She was remembered for her “unfailing courtesy, clear unhurried sense of direction and purpose, and sharp eye for detail”. In 1972, she was awarded a DBE (Dame Commander of the Most Excellent Order of the British Empire) for services to education and the Church.

She also supported the arts, putting her skills to practical use. For example she was a member of the Independent Television Authority from 1956-60, the first woman chair of the Royal Society of Arts between 1979-81 and a patron of the Salisbury Festival for many years.

When she moved to The Close in Salisbury in 1983, she continued her involvement with the life of the city: she was a governor of Godolphin school, and was also involved with the Cathedral:  she was installed as a Lay Canon in 1987. She was a passionate advocate of women’s ordination, and saw the first cohort of female priests being ordained shortly before her death, in 1996.

Researched and written by Rachel Cude. Notes and edits by S. Ali

1The Plowden Report was the report into primary school education by the Central advisory council for education for England which was chaired by Lady Plowden. It proposed a child-centred and progressive way of teaching (‘At the heart of the educational process lies the child’) which focused on children as individuals, and was influenced by theory from the developmental psychologist Piaget, drawing on concepts such as learning through play. The report proposed quite a big change from previous ways of teaching, and attracted criticism as well as praise. It is also said that it was  misunderstood and misinterpreted by many. Nevertheless it had an impact on primary education for many decades- some of which we take for granted within the education system today.

Britain, Knights of the Realm & Commonwealth Index, via findmypast.co.uk