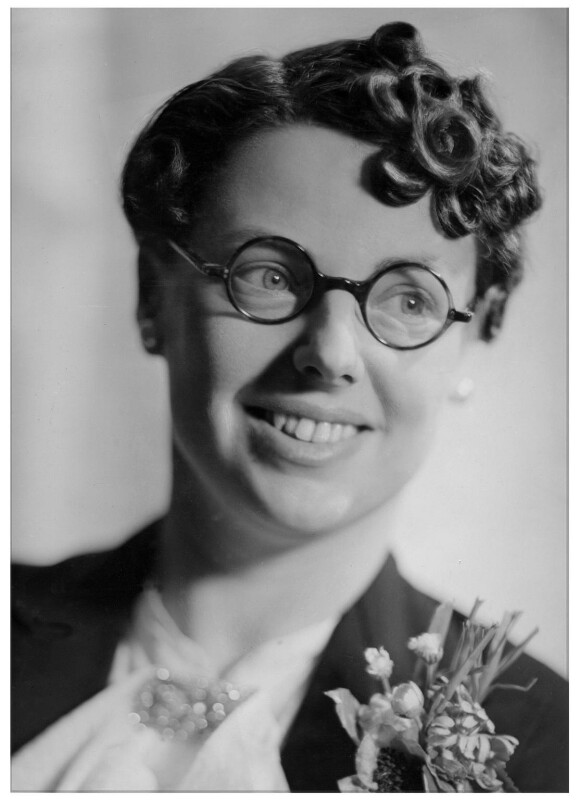 Margery Sharp (1905-1991) was the best-selling writer, playwright and screenwriter of adult and children’s whimsical fiction who inspired the box office busting Disney film ‘The Rescuers’.

Clara Margery Melita Sharp was born in Salisbury in January 1905 to Yorkshire-born couple Clara and John Sharp.  Her father was a Civil Servant in the War Office, briefly working in the Army Accounts Office. Shortly after Margery’s birth, the family left Hulse Road, Salisbury to go to Malta, where John was seconded. Here Margery attended the Chiswick House School[i]. Her interest in writing started early – she had planned to be a writer from the age of seven.

When Margery returned to the UK from Malta, she received a good education at Streatham Hill High School, with a distinction in English and English History and a Higher Certificate (1923). She worked briefly as a typist for a year, and then in 1925 she began attending Bedford College, University of London[ii]. She studied Intermediate Arts, then French with English. Her college career was devoted “almost entirely to journalism and campus activities.” This included story contributions to Punch magazine. She had a mentor in Sir Owen Seaman, the satirical Editor of Punch, who corresponded frequently with her and sent her letters encouraging her writing[iii].  She left the college in 1928 with a BA(Hons) Class II degree.

She then spent a year studying art at Westminster Art School, and it is clear from her books she had a passion and discipline for drawing and painting. While studying, she joined the National Students Union British University Women’s Debating Team, visiting Poland and Ireland. She was also chosen to be part of a team who visited American Women’s colleges all over the United States. The journey in 1928 by train and Steam ship with two other young women saw Margery mentioned in the press, including in the Sunday Mirror, and she also wrote about her tour experiences for the Evening Standard.

After university Margery continued with her writing. She was disciplined and focused in her writing as well as researching her work meticulously. Her work drew on her own life experiences and locations she had lived in, for example part of her novel Sun in Scorpio was set in Malta. Although her work is known for being witty and comic in nature, she has also been praised for her characterisation and the complexity of her characters. The women characters in her books are striking in the way they are portrayed in relation to the changing societal norms of the time.

As well as her contributions to Punch magazine, her work was published in many other magazines including Encyclopaedia Britannica, Strand magazine, the Saturday Evening Post, the Ladies’ Home Journal, Harper’s, Woman’s Home Companion, Harper’s Bazaar, and Fiction Parade. She contributed mysteries to a Mystery and Adventure Stories for Girls, edited by Eric Duthie, and an Ellery Queen collection of mysteries. In addition, she also serialized novels in ladies’ magazines and newspapers, some of which had been released in instalments, before publication in hardbound book form. Margery set her goal at making £3 a week, this, apparently, came readily with the sale of one short story a month. Astonishingly, her first novel, Rhododendron Pie, only took her a month to write and was published in 1930, to critical acclaim.

Over her writing career, Margery wrote twenty-two novels in addition to novellas and stories. She also wrote fourteen children’s books and was a successful children’s book author. Her novels were best sellers, and she was successful in Britain and in America. The reviews of her books were alongside those by notable authors such as Harper Lee, Neville Shute, Agatha Christie, and Lewis Carroll. By 1972 most of her books were out of print, but a fan base persists, and reprints have been published recently.

Her adeptness for characterization and tight plotting made her work a natural fit for film and stage adaptation. Three of her novels — The Nutmeg Tree (1937), Cluny Brown (1944), and Britannia Mews (1946) —were made into feature films. In addition, Margery wrote or adapted numerous plays, including the 1962 comedy The Notorious Landlady, starring Jack Lemmon and Kim Novak, which was based on her short story called ‘The Notorious Tenant’. The Rescuers, written in 1959, was adapted into two Disney animated films[iv].  The plays were hugely popular and presented all over the country.

During the second world war, Margery spent 3 years serving as an Army Education Lecturer. It was a busy time: she travelled far, giving 10 talks a week and continuing with her writing, while maintaining a schedule of touring gun sites and searchlight posts.

She and her husband, Major Geoffrey Castle[v], lived a glamorous life, making frequent trips abroad including to New York and Brazil. They lived in various places including London, Lincolnshire, Lancashire, Oxford and Aldeburgh, Suffolk, where Margery lived in later life. 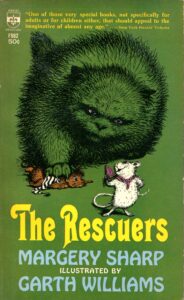 Margery died in 1991 at Debden, Suffolk. She has left a legacy through her work, much of which has a timeless quality to it, and over the years she has had a dedicated readership, as well as people discovering her novels for the first time. She has been lauded for her ‘vision of the surprisingness of life, the breakability of rules, the spirit-cleansing power of the irrelevant’[vi].  In 2016, ten of her adult novels were released as e-book editions.

Image of cover of Margery Sharp’s ‘The Rescuers’ https://www.flickr.com/photos/alittleblackegg/

The Nutmeg Tree (1937), which was made into the film Julia Misbehaves

Three Companion Pieces (1941) – contains Sophy Cassmajor, The Tigress on the Hearth and The Nymph and the Nobleman

Cluny Brown (1944), which was made into a movie of the same title

Britannia Mews (1946), which was made into the film The Forbidden Street

The Lost Chapel Picnic and Other Stories (1973)

Miss Bianca and the Bridesmaid (1972)

The Lady in Waiting  (Broadway show, 1940; adapted from The Nutmeg Tree)

The Rescuers Down Under (animated film, 1990)

The Foolish Gentlewoman (adaptation of her novel of same name) produced London, 1949, at the

‘The Portrait’ A mystery story found in the anthology of horror/mystery ‘In the Dead of Night’–edited by Michael Sissons, published 1961 London, Gibb, and Phillips.

[i] This school was originally created for children of British families stationed in Malta.

[ii] Bedford College was founded by social reformer and anti-slavery activist Elizabeth Jesser Reid, and at the time it was part of the University of London. Eventually it merged with the Royal Holloway College.

[v] In 1938 she married Major Geoffrey Lloyd Castle, RFA,RFC, and RA, who was an aeronautical engineer, one-time journalist and writer of early science fiction.