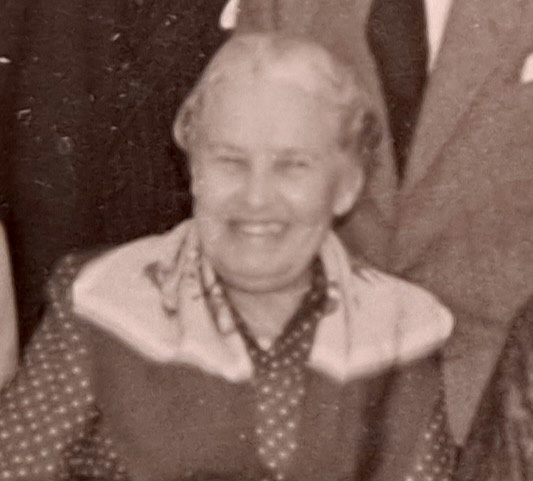 No Comments on Olive Pye-SmithPosted in Her Stories, Historic Women By Barbara EvansPosted on 7 February 20228 February 2022Tagged Artist, Philanthropist

Olive was born in Lee, Kent to Edward Pye-Smith and Gertrude Taunton.1 As a young girl she came to Redlynch, near Salisbury where her mother’s large family had farmed for generations. Later her younger brother Desmond was born in Salisbury, and they moved into Number 14 The Cathedral Close.

Her grandfather was involved in local politics and her father became Mayor of Salisbury in 1894.2  Her mother took an active interest in welfare issues throughout her life and as Olive grew up, she accompanied her mother to talks on the Temperance movement and the application of the poor laws.

Her mother took an active role in progressing the education of both children. Olive was entered for the entrance exam to Godolphin school in 1888 when the age of admission for girls to high school was lowered to 8 years. The first reference we have for Olive as an artist was at age 18 when she left home to become a pupil of Miss Kempe-Welch, a well-known equine artist and Principal at an art School in Bushey.  After two years of study, she was accepted into Mr Calderon’s studio at the St John’s Wood School of Art,  an establishment that would prepare Olive for the Royal Academy school entrance exams.  Here she produced a poster of plough horses to advertise Thorley’s food.

At the age of 21 Olive was accepted into the Royal Academy school, at a time when women had gained equal access to the full training course.  A graduation photo of her class in 1906 shows a group of about 30 students of whom more than two thirds are female.3 The Professor of Painting at the Royal Academy during her time there was Sir George Clausen.  They became friends and regularly corresponded.  She sat for his painting ‘Portrait of a Lady’ at his studios in 1908.4

It is interesting to note that Olive was a woman graduate of the Royal Academy during a time when the institutions of the British art world remained off limits to women. This male-domination made British Art institutions the target of high-profile attacks by suffragettes in 1913/14.5

Studying at the RA had given Olive the skills to support herself across a long career as an artist. She returned to Salisbury and over the next 30 years Olive built up a considerable reputation for her paintings in and around Salisbury, mostly in watercolours.  She painted many different aspects of the Cathedral, including one during the 1915 floods, when the Cathedral Green and the nave were under water.  She also painted numerous Wiltshire landscapes in many forms, including Ebb-tide-Studland Bay and Laverstock Meadows. Olive’s painting ‘The Old Road to Stratford-sub-Castle, Wiltshire, Seen from Castle Road looking South-West’(1962), is hanging in Salisbury and South Wiltshire Museum.6

Some of her work in Salisbury was of historical interest because it captured odd corners of the city which had disappeared even then. She was co-opted as a member of the ancient building committee of the Salisbury City council, which was compiling pictorial records of interesting buildings and features before they disappeared.7

Olive gave art lessons locally and undertook commissions including a portrait of Sir Edward Hulse, son of Lady Hulse who became the first woman Mayor of Salisbury. She travelled frequently to Norway, Switzerland, and Austria in her search for new landscapes. Olive put on regular local sales and exhibitions in the Church House in Salisbury with fellow female graduates from the RA. A proportion of the profit was always donated to local charities including the Salisbury General Infirmary Building fund.8

Olive was involved throughout her life in improving the lives of local people. In 1916 she was asked by Lady Hulse to help set up the child welfare wing of Hulse House in Mill Road, Salisbury.  She was voted to the chair of the local NSPCC committee in 1934. She was the Secretary of Salisbury National council of Women which focused on the working conditions faced by women. She was one of 4 persons recommended to the Public Assistance committee for discharging the poor law functions which had been transferred to Wiltshire County Council.9

When her father died in 1929 Olive and her mother moved into Friary court. Olive was sworn in as a magistrate for Salisbury in 1939 and the same year moved into her own home in the Friary, Salisbury.10 She regularly hosted lodgers such as Red Cross nurses and ATS convoy drivers were also billeted overnight during the war.  She lived there until her death in 1972.

After her death, a letter was found in her possessions from General Pitt Rivers dated 1891.  It was addressed to her father and spoke about the reasons why the General had wanted to purchase Old Sarum from the Dean and Chapter. The request had been leaked to the newspapers and following a public outcry the request was denied.11

Researched and written by Helen Marston. With thanks to Brian Evans and Redlynch History society for assistance with finding sources and information.

Her Salisbury Story would also like to thank the Jamieson family for their kind permission to use the photo of Olive.

5 More on this can be found at the following links:  https://www.royalacademy.org.uk/article/deeds-not-words-suffragettes-and

7 Ancient and Historical Monuments in the City of Salisbury | British History Online (british-history.ac.uk)